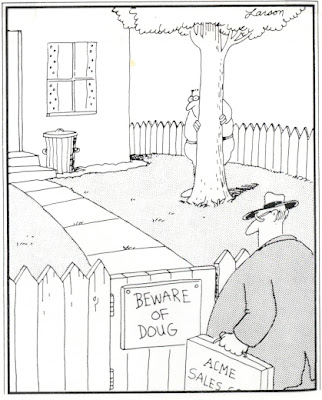 Why Do They Not Attack Canada?
Hello, choir. We have a guest preacher in today, who hails from at least three unlikely places: the Republican Party, the US Congress, and Texas. Ron Paul (via Church and Empire):

...9iu11ani saved his most forceful comments for religious extremism in the Muslim world:

"They've perverted their religion into a hatred of us. Our foreign policy is irrelevant, totally irrelevant, if you read what they write, if you bother to listen to what they say, this comes out of their own perverted thinking."

Taking up his repeated role as a thorn in Giuliani's side, Rep. Ron Paul took great umbrage with the former New York City mayor's assertion:

"Why do they not attack Canada," he asked, "why don't they attack Switzerland?"

Giuliani talks about 9/11 so much it seemed time to integrate it into his name: 9iu11ani. He should have the numbers branded onto his head. When I Googled the term, I found that Democratic Underground had already started using it. No good graphic has been done yet, so I Googled "beware" and found the Far Side cartoon above.
Posted by MarcLord at 3:42 PM