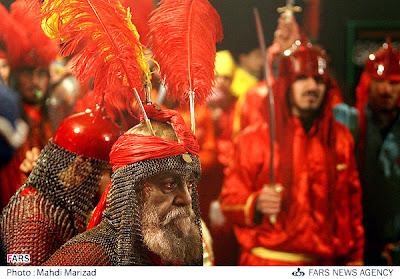 Ashura & The Shiite Passion Plays
Naj, a friend and Iranian ex-pat who runs Iran Facts (link at right margin), has written an enlightening summary of the Ashura festival in Iran, one which bears similarities to Christian passion plays held around the world. As celebrations re-enact the martyrdom of Jesus, so Ashura commemorates the martyrdom of Hussein, inspiration of the Shi'ite faith. Naj explains Ashura's significance, in particular the basis of the schism between Shi'ite and Sunni forms of Islam, as expressed in the street plays known as ta'ziyeh (lit. "compassion, mourning"):

As a dramatic form it has its origins in the Muharram procession commemorating Hussein's martyrdom and throughout its evolution the representation of the siege and carnage at Kerbela has remained its centerpoint. Ta'ziyeh has never lost its religious implications. Because early Shi'ites viewed Hussein's death as a sacred redemptive act, the performance of the Muharram ceremonies was believed to be an aid to salvation; later they also believed that participation, both by actors and spectators, in the Ta'ziyeh dramas would gain them Hussein's intercession on the day of the Last Judgment.

People, Sunnis much included, have criticized Shi'ism as medieval, gruesome, superstitious. Again, parallels between Shi'ite and Sunni conflicts are fairly comparable to those between Protestantism, expressive folk forms of Catholicism, and the body with claims originating authority over all things Christian. In the late 1700s, the Catholic Church banned passion plays in Europe, particularly Germany, as being too bloody, boisterous, and pagan-bordering. Oberammergau soon gained a passion play monopoly through a deal in which they changed their celebration's title, toned down the edgy displays, and charged for tickets, drawing about half a million visitors once a decade ever since (and for a one-time 350th anniversary in 1984). Outside Germany, the popularity of passion plays has spread, and are practiced in South and North America. Shi'ites are by no means alone in re-enactments of suffering, or in practices seen as beneath the dignity of other groups who supposedly share the same religion.

Demographically, Shi'ites are the fastest-growing segment of Islam and already significantly outnumber Sunnis, a fact which gives the lie to the deterministic 'Clash of Civilizations' logic. (Which goes, in short: other religions are quickly out-breeding Christianity, ergo the West must attack while the chances for success are still high. Thus the Iraq grab and the Iran end game.) Naj again provides a quick history check:

In the first years of the sixteenth century, when under the Safavid dynasty, Persia, which had always been a strong cultural power, again became a political power, Shi'ite Islam was established as the state religion and was used to unify the country, especially against the aggressive Ottomans and Uzbeks who were adherents of Sunnite Islam.

All anecdotal evidence indicates that religions exhibit a strong tendency to schism over time, not to unify. Judah was but one tribe of Israel, and ten went missing somewhere. Islam is technically an off-shoot of Judaism, and recognizes Christ as an important prophet. (How about "United" Methodists? Ha!) Islam is about to schism further, and of course the Bush Doctrine is based almost entirely on the opposite assumption. Wahabist philosophers may have correctly diagnosed and exploited the West's weaknesses, but they overlooked their own glaring problems: their chances of unifying Islam are extremely low in the absence of a Western Crusaders, encouraging a personal relationship with the Koran invites the attendant dangers of differing interpretations, and Iran is a bigger threat to al-Qaeda than the US ever will be.

'Foreign policy' means getting other countries to do what you want. If a capable diplomat keeps the principle of religious disunity mind, much can be quickly done with little more than travel vouchers and a free hand to first extricate a mired foot from the Mideast, then a leg, then maybe two. Not to mention greatly improve relations with Iran, which shouldn't be further driven into Russian or Chinese embraces; Iran should be engaged and helped in their goal to generate nuclear power, unravelling their biggest knot of anxiety: depleted oil fields.

A policy of de-escalation in rhetoric and force re-deployments will work immediate wonders, eroding support for mirror-image radicals who stir the embers of conflict. Iran may have old vendettas with the US and fully share in Islamic enmity for Israel, but it hates al-Qaeda, and in the equation of Realpolitik, it can be a policy anchor, a successful, eventually friendly counterbalance for non-violent containment. 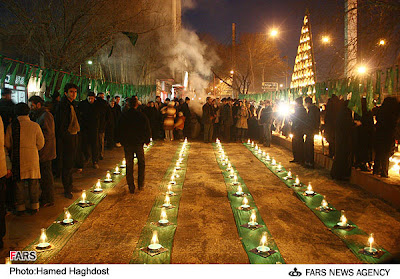 Thanks for this post Marc, I was hoping someone will enlighten me about the cultural similarities with other forms of religious theater.

I just have to mention that my post is based on excerpts from "Peter Chelkowski published in Ta'ziyeh: Ritual and Drama in Iran"

I am going to link to your post now :)

I'm no Islamic studies expert, but do find it very hypocritical for Sunnis and Christians to criticize Shi'ites for bloody displays, idol worship, blah blah. And I should've mentioned the Shia emphasis on humility, which was Christ's emphasis.

Thanks for linking, and for pointing out the Chelkowski book!