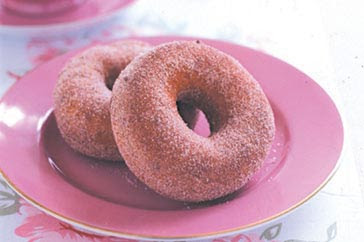 For Good Measure: Nut Job Party Fields Wacko Candidate
Warm cinnamon donuts, just out of the oven. Every time Mike Huckabee's name is mentioned, that's the feeling I get. Why? Oh, only because he's on the Republican Party's back like the toothless hillbilly was on Ned Beatty in the famous man-rape scene in Deliverance. And because I just want a little revenge for the last 6 years. Is that so wrong?

I'm thankful for every extra day Huckabee doesn't blow up and bellow "I will destroy you!" at an audience, for another week which passes without him sending a critical reporter one of the three-page long insult-a-thons he's famous for in Arkansas. Every day is a gift. It's like getting up in the morning, opening your door, unfolding your Wall Street Journal and seeing a headline which says, "Nut Job Party Fields Wacko Candidate." How do I describe the wackosity level? I can't. But, Bruce at The River Blog put up a good synopsis written by Rolling Stone's Matt Taibbi:

As president, Huck would support a constitutional amendment banning abortion and would give science a back seat to religion. "Science changes with every generation and with new discoveries, and God doesn't," he says. "So I'll stick with God if the two are in conflict." Huckabee's well-documented ­disdain for science was reflected in the performance of the Arkansas school system when he was governor; one independent survey gave the state an F for its science standards in schools, a grade that among other things reflected Huckabee's hostility toward the teaching of evolution.

Huckabee at most times is gentle and self-deprecating in his public address, but when he talks about religion, he gets weirdly combative and obnoxious, often drifting into outright offensiveness. At one appearance, Huckabee — who's been known to make fart jokes in front of the state legislature — said he would oppose gay marriage "until Moses comes down with two stone tablets from Brokeback Mountain saying he's changed the rules." And he recently scored a rare offend trifecta, simultaneously pissing off immigrants, Jews and the pro-choice crowd when he ludicrously claimed that a "holocaust" of abortions had ­artificially created a demand for Mexican labor.

The D.C. Pug establishment has their undies in, well not even a bunch. Huckabee has them so intensely humiliated they're not wearing undies. See Ned Beatty, above. ("Ah sayed squee-uhl lahhk a peeg!") Every day, they're asking themselves, "How should he die? Let's see here...plane crash? Squashed by a bus? Suicide bomb? Somebody call Richard Perle." The Neo-cons hate him worse than any leading Democrat. For starters, let's compare Huckabee's foreign policy advisors with the other Pug candidates:

There isn't enough Prozac to keep the Pugs going. For as long as it lasts, the greatest thing about the gaseous bible-humper is that, not only does he merit his own DSM-IV entry, he's also the logical conclusion of every backward, bad, buggering thing the Republicans have ever successfully mobilized or have pandered to. What they've wrought on our country is finally coming back on themselves.

There's a very real possibility Huckabee will be able to keep the venom of god's wrath bottled up for long enough to take his Party's nomination for the Presidency. In Iowa, where Huckabee got all medieval on Mitt the Mormon, Obama, Clinton, and Edwards each got more votes than he did. I hear banjos twanging in the distance, and every day is gravy.

(Inspirational thanks to Bruce and Jesus.)

Huck really has tremendous appeal. He's so likable you kind of forget how extreme he is. There isn't another Republican who can hold a candle to him at thinking on his feet, and he's the only viable "change" candidate amongst them.

The good news is that Obama, Hillary, and Edwards would all win in historic landslides running against Huckabee. I mean we're talking 65-35 or better, popular vote.

Marc...thanks for checking on me..I can't find you email addy and would like to tell you what's going on.. Can you email me at hopespringsaturtle@gmail.com

It's weird how you can come to depend on a 'friendly face' you've never seen. Thanks.

Whew. I sure as hell hope you're right about anybody winning against Hucksterbee...

I am completely confident that Huckabee would get doused. And, of course, Canada is but a ferry ride away.

People forget that NH is an open primary state. This favors cross-over moderates. But most states have closed primaries, where you have to be "one of us" to get in the door.

right, and the Clintons after Iowa were planning to focus their spending only on the closed primary states, figuring they were screwed with the Independents. NH is causing them to re-think that now, but my gut says McCain stole one from BHO, and he'll also do well in Michigan, where the Dims have totally screwed the pooch and OBH and Edwards aren't even on the ballot.