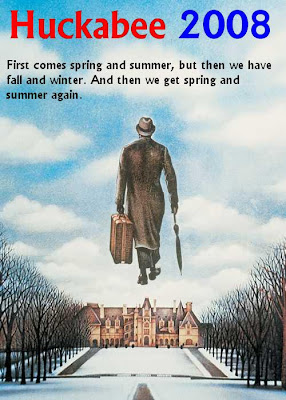 "We Used To Fry Squirrels In A Popcorn Popper"
Huckabee. The gift that keeps on giving.

After pulling an upset in the Iowa caucus, Mike Huckabee has now placed a respectable third in two northern primaries, New Hampshire and Michigan, but he has hopes of doing much better in South Carolina.

Huckabee spoke to MSNBC's Joe Scarborough from Columbia, SC, saying enthusiastically, "South Carolina's a great place for me. I mean, I know how to eat grits and speak the language. We even know how to talk about eating fried squirrel and stuff like that, so we're on the same wavelength."

"Mika, I bet you never did this," Huckabee went on, addressing Mika Brzezinski. "When I was in college, we used to take a popcorn popper, because that was the only thing they would let us use in the dorm, and we would fry squirrels in a popcorn popper in the dorm room."

Full article here.
Posted by MarcLord at 10:16 AM