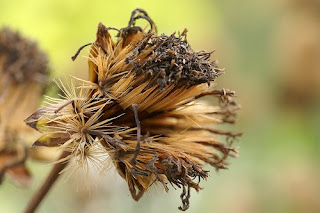 A Valentine's Day Reminder, And Where Those Flowers Come From
I'm one of "those" people who only have a vague idea of when holidays or birthdays occur, and get by through the kindness of strangers, relatives, and the collective unconscious. When is Mother's Day? Sometime in the spring. Christmas and New Year's Day, got those down, but Thanksgiving is ever-elusive, and the mnemonic for my wife's birthday is "D-Day plus 6." A friend alerted me that Valentine's Day is coming up in a couple weeks, so I started griping about how we're expected to plunk down $75 for a dozen roses despite flowers having been outsourced like everything else.

Turns out my friend knows a lot about the cut flower business, the globalized state of which is much worse than even I suspected. Basically, imported cut flowers are grown in toxins like banned ozone-depleting methyl bromide, tended by impoverished campesinos in factories, hosed down with enough pesticides to kill said campesinos, and the carbon footprint of each frantically delivered bouquet 5 lbs. Hoo boy. "Happy Valentine's Day, honey--here's your environmental devastation! Complete with human rights abuse." I asked for a good info source and he sent over a white paper:

By William Armshaw
Beautiful cut flowers, harvested in mountainous regions of Columbia or Ecuador, refrigerated, then rushed to delivery in the US, are a miracle of our modern globalized economy. As with any other mass-produced imported agricultural good, there are significant environmental costs, both in production and in transport, that are not readily apparent to the American Consumer or legislator.

Since the Andean Trade Preference Act of 1991, cut flowers from Columbia and Ecuador are allowed to enter the US duty-free. The act has failed in its original intent, to encourage campesinos to grow crops other than Coca. However, it has supported a robust market for flowers grown for the US Market.

ß The cut flower industry is huge, with Americans purchasing annually some $6.4 billion worth of stems and bouquets. The Society of American Florists estimates 215 million roses alone are sold at Valentine’s Day.

ß The vast majority of cut flowers are imported. 80% are imported from Columbia or Ecuador, including roughly half of all roses and more than 90% of carnations and chrysanthemums. Colombia alone has over 100,000 flower workers toiling under many square miles of greenhouses.

ß Flower importing is a “Race Against Time” – cut roses survive for only 10 days under optimal conditions: they are refrigerated throughout their journey from the Andes to the Miami distribution hub, where they are usually put onto a 2nd airplane for distribution within the US – all at the optimal temperature of 34 degrees F.

ß A bouquet of flowers has a high lifecycle carbon footprint: conservative estimates suggest that the air transportation to the United States alone creates 3.1 pounds of carbon per bouquet – and that does not include carbon released via constant refrigeration, by distribution within the US, in production, or in the manufacture of fertilizers, pesticides, and other chemical agents. The New York Times, reviewing PepsiCo's efforts to identify the carbon footprint of Tropicana brand orange juice, found that the “production and application of fertilizers” and other chemical agents accounted for a far larger share than had been predicted. It is safe to say that the lifecycle carbon footprint of each bouquet of flowers is at minimum 5 pounds of carbon.

ß As with most monoculture agricultural production, large amounts of dangerous chemicals are used in growing operations, including many agents, such as methyl bromide and methyl parathion, which the United States and European Union deem to be too dangerous or too toxic for use within the US. Florverde, the primary Colombian growers' association, claims that exporters there apply nearly 90 pounds of active ingredient per acre per year. 36% of the toxic chemicals applied by Florverde plantations in 2005 were listed as extremely or highly toxic by the World Health Organization.

Effects on Health of Workers in Host Countries
Note: wages in flower work in Colombia and Ecuador are about $150/month, which is a sustainable wage for source country economies. Issues of “Economic Justice,” while significant, will not be considered here
Andean monoculture rose production requires ample and frequent does of herbicide, nematicide, and fungicide. Worker rights and worker health are not a priority: A 2007 study by the International Labor Rights Fund (ILRF) found that more than 66% of Ecuadorean and Colombian flower workers were plagued by work-related health problems -- including skin rashes, respiratory problems, and eye problems -- due to toxic pesticides and fungicides. ILRF, drawing on the work of Harvard School of Public Health researcher Philippe Grandjean, also found that "flower workers experience higher-than-average rates of premature births, congenital malformations and miscarriages."
Environmental Health Perspectives found that "[o]ver 50 percent of respondents who worked in fern/flower farms reported at least one of the symptoms of pesticide exposure -- headache, dizziness, nausea, diarrhea, skin eruptions, fainting and so on."

Richard Wiles, vice president of research for the Environmental Working Group, says that consumers are buying roses that, toxicity levels suggest, should be handled by workers wearing gloves. Wiles suggests that pesticide residue on the petals of imported roses is fifty times that allowed on food imports.

In summary, Imported Cut Flowers are Beautiful, and the speed at which they are flown around the world is nothing short of a modern miracle. However, both the farming practices used and the sheer number of miles of refrigerated rapid transit involved mean that South American cut flowers are a luxury we can no longer afford, and certainly are not worthy of favorable trade incentives.

Add imported flowers to the list of things to NOT buy.