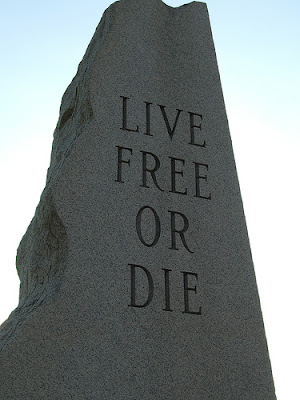 Pseudoantidisestablishmentarianism: Clinton, McCain Win New Hampshire
The Clintons live to fight another day, the bitter cold of non-inevitability dispelled for the moment in the balmy January weather of the "Live Free or Vote for Mitt Romney" state. As one voter said to an NPR interviewer, "This is New Hampshire! If you tell us we should pick A, we pick B. If you tell us to choose C, we choose D."

The biggest loser in New Hampshire was John Edwards, whose support shrunk to 17%. The biggest winner was John McCain, who had laid off much of his staff two months ago and was a political zombie. He repeated his 2000 Granite State hat trick to beat former Massachusetts Gov. Romney by 7 points in a second-home state. Huckabee surprised with 12% despite barely campaigning and having only $2 mill cash in the bank. If you add his share to McCain's, and to Ron Paul's, Romney was thumped by over half the Pug turnout, which is also clamoring for change. Huckabee now leads national polls for the first time, by 1.5%.

As Lord Wife insightfully observed, McCain took a lot of independents away from Obama, likely the biggest reason he lost to Clinton when having polled by +13 the previous day. New Hampshire, for some reason, is inordinately fond of McCain, and has an open primary where Independent voters with a decidedly Puggish streak are key. Clinton also won relatively more women than in Iowa, and her stronghold amongst over-65 females proved telling. She has reclaimed momentum. For McCain, victory in NH is a delightful, satisfying blip which can't be carried through. Politico.com's exit poll observations on Clinton/Obama:

Here are the groups in which Obama enjoyed a significant margin over Clinton: men; young voters (18-24); voters making more than $50,000; voters with post-graduate education (a good indication of professionals); independents; first-time voters; voters without religious affiliation; men without children and single men; voters who said they were getting ahead financially; voters who thought the war in Iraq was the most important issue; voters who wanted change; and voters who wanted someone who could unite the country.

Here are Clinton's groups: women, particularly married women; voters over 40; voters making less than $50,000; voters without a college degree; union voters; Democrats; Catholics (an important constituency for the Democrats); people very worried about the economy; voters who thought the economy was most important; voters who valued experience; and voters who evaluated candidates on whether they "care about people like me."

There were anomalies. Voters who thought the war in Iraq was the most important issue favored Obama, 46 percent to 33 percent, while voters who favored our withdrawing all troops "as soon as possible" favored Clinton 40 percent to 36 percent. That may reflect Clinton's higher rating as a potential commander in chief, or it may just be a statistical anomaly. Clinton's support by 38 percent to 20 percent over Obama on the question of which one of these candidates "cares about people like me" is also interesting and suggests that Obama has a different kind of charisma than Bill Clinton or George W. Bush.

Thanks SLL, I dig his stuff. Will link.