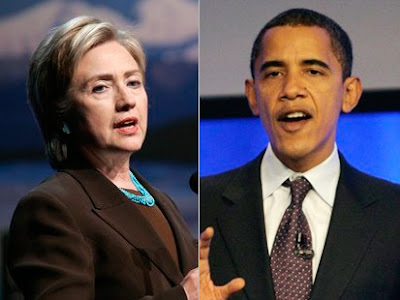 Shorter Clinton, Shorter Obama
The Drudge Report has an "Obama Break-out in Iowa" ABC News Story up as its featured Big Red Link. Bottom line, Iowa's still up for grabs because it's difficult to trust Hillary (so much to not talk about). Barack Obama continues to have occasional lapses into sincerity, his staffers dreading the next I'm Not Nuking Iran Moment. So I thought of glossing over all pertinent detail to boil Clinton and Obama down into one bipolar statement each. Slogans encapsulating their pros and cons. You know. To try my hand at thinking...like a voter. Here we go:

People sense these things intuitively. Hillary would get universal health care through, but she'll do so by freeing corporations from the burdens of providing it. People will, on average, pay even more for it. Obama represents a new way of doing things, which unfortunately involves eschewing the financial cocaine tray, getting into the gym, and sweating like pigs.
Posted by MarcLord at 3:53 PM

There are two excellent articles about Obama in the December issue of The Atlantic. I especially appreciate the one that made the case that Obama offers an alternative to the current schism in American politics that dates back to the 60s.

Hilary seems like a "kinder gentler" form of the GOP, and Obama seems insubstantial. There's not a single Democratic candidate I'd vote for; wonder if we can outsource the leadership of this country to, oh, say, New Zealand?

I think that an open season should be declared on all politicians and theo-babblers.

If we got rid of them all we might have some chance of putting the world right.

MarcLord said...
This comment has been removed by the author.
11:06 PM