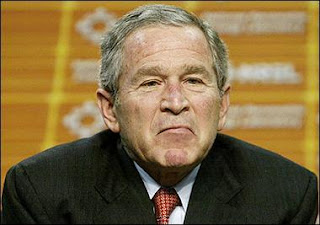 Wake-Up Call For Mr. Deep Throat
Feline-festooned bloggers Zoey & Me note that, as we enter the holiday season, Bush dramatically cut pay raises for Federal employees. So..if you were a government worker expecting a 15% wage increase next year, the one you'd been promised, how would you feel about getting, say...3%? Just a little lump of coal for 2.6 million to sit on while idling in Beltway traffic jams.

"Deep Throat" refers to a disgruntled federal employee who was the Deputy Director of the FBI, William Mark Felt. Felt served as deep background to Mssrs. Woodward and Bernstein. For the benefit of any youngsters who come here by accident, Woodward and Bernstein were the reporters whose investigation and articles fueled the Watergate Scandal, which in turn brought down another real hellhole of a Presidency, Richard Milhouse Bat-Shit Nixon's. The Nixon Administration had passed a less-qualified, politically chummy Patrick Gray over Mark Felt's head to be the new FBI Director. Felt didn't need to ask, "What's my motivation?" One may surmise he wanted Nixon, CREEP, the Plumbers, and pretty much anyone near the White House to rot in hell. Did a decent job of it, too. Regarding where anti-Bush disgruntlement can lead, Z&Me had a quality insight:

What’s really funny is history shows that when any president slashes or cancels raises to the underlings, moles appear from everywhere and news organizations are hopping with spicy inside tid-bits the administration would not have wanted made known. Hey, maybe we’ll finally find out who outed Valerie Plame.

True, and the Emperor's servants have a natural penchant for hollowing out the grain stores. But the moles don't exactly have a smorgasbord environment of leak options, the Washington Post ain't what it used to be, and the press already knows damned well who outed Valerie Plame. For example, the news that Halliburton got the $10 billion contract for cleaning up Iraqi oil fields before the war even happened, well heck, that was no leak--they proudly announced it all by themselves, like, "Get ready, America! We're gonna take a dump right on your face, woo-hoo-hooo!"

By all means, please, leak the dastardly documents, heap up the damning evidence. If any of pissed-off federal workers come across anything juicy, let me know in the comments section. But let's face it. The Washington Post or the MSM isn't going to bring this government down. Never was. For at least 6 years in the United States, a literary review magazine (The New Yorker, circulation less than one million) has been the #1 place where you go to break another Bushco-mondo crime/idiocy/lying/torturing/murdering/screwing Republican scandal. So enough with the newsprint. Call up Oprah, Colbert, the Daily Show. And here's hoping some of The Newly Screwed get all impromptu and hold a Bring Your Napalm To Work Day.
Posted by MarcLord at 1:05 PM