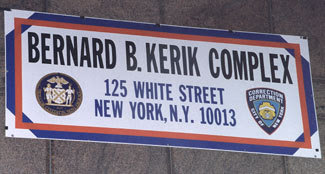 Giuliani's Bernard B. Kerik Complex
If you like Rudy Giuliani as a presidential candidate, or know someone who does, here are the only two words and valid in any language, that you will ever need: Bernie Kerik.

In today's NY Daily News, Sports writer Mike Lupica updates us on the latest moves of the former Passaic county jailor, Giuliani driver/bodyguard, NYC Corrections Commissioner, NYC Police Commissioner, Judith Regan trystee, Homeland Security Director, and Administrative Authority of Iraq thug-or-other. In short, Kerik may be going to jail on the 30 counts he was recently indicted with, and Lupica finds this ironic. Not least because Giuliani re-named "The Tombs," Manhattan's infamous detention center, the Bernard B. Kerik Complex. He waited a whole three months after 9/11 to extend that honor (what, don't you want to have a prison named after you?), and to make Kerik a partner in his firm, Giuliani Security. The firm's relationship with Taser International, earth's largest maker of human stun guns, has earned Kerik more than $6.2 million in pre-tax profits through stock options he was granted and then sold, mostly in November 2004.

Wait a minute. Giuliani. Kerik. Security. Right. Giuliani and Kerik know a lot about security. For example, on the morning of 9/11, as a kerosene cruise missile flew over my unwitting head to spear WTC 2 like a shish kebab, Giuliani and Kerik were conducting a chemical warfare drill with the Federal Emergency Management Agency at Pier 19. It's about a mile north of the trade center off the West Side Highway. What a view they must've had, huh? Kerik must've looked at Rudy and said, "Gosh. We were just in there...for a fake terrorist attack...and there's a real one...right out here! Holy cat-houses, Batman. Ain't that a coincidence!?"

Weird. Admittedly, it's not as weird as Giuliani leading the all-important "Polls." Still. But, umm...America? This is nuts. It's like inviting Tony Soprano's crew over for dinner. Do it only if you're serious about adding some real excitement to your life. Mental note to nation, and self: when Giuliani runs things? Just because things are fascist doesn't mean they're secure. In fact they, ahh--how do I say this? They blow up.
Posted by MarcLord at 12:00 PM

Actually Marc, just one word,'putz.'
Every day that goes by I'm more appalled by the state of my nation.
Veterans day and an administration that abhors the very people who serve them. Today has been tearful. Dr. Turtle came home from work today (no days or nights off in 12 days straight, and none due til next Sunday) and told me of his day. Saved a Marine after a suicide attempt.

How was your day? Thanks for the post. I wish I could stomach it.

Yes, one word does it for G-man.

Sorry to hear the bad day, Hope. Glad Dr. Turtle was around to save a Marine (time does heal most wounds, hope s/he makes it that far).

My biz partner asked me yesterday, "Whatever happened to Veteran's Day?" And he and I really started to look for the answer, googling, wiki'ing, thinking...I remember the parades in my little Gremlins-town when I was a kid. When did they stop the parades, I asked.

Turns out my partner is personal friends with the head of the Wisconsin state Veteran's Administration. He called him up and popped the question. Here's the answer he got: the parades pretty much stopped with the Vietnam War. And Wisconsin (is the only state which) doesn't recognize Veteran's Day as a Federal holiday.

As opposed to "collapse"?