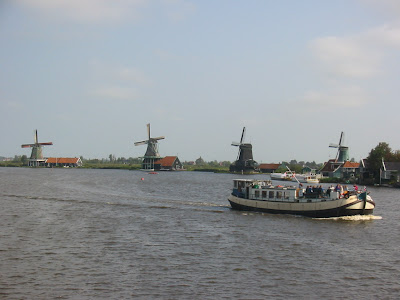 Petroliana, Part One
From the detritus of the past, little dots can be sifted up, bits by themselves which convey little meaning at the removes we may find our societies and souls. Yet they can often be connected into plots which yield meta-meanings, and by those, I mean empyrean meanings. These live in a netherworld with neither up, nor down, nor axis, but are the eternal forces which suspend in love and lightly gird a primum mobile, which watches down on the hubbub of our material heavens. They are best perceived from the perspective of eons, the kind of meanings which govern life.

Is it possible to back up far enough, to achieve perspective that sees truths in their less temporal forms? The only aid I know is history. I am thinking of a museum at Zaandam, a grassed-over industrial complex on the outskirts of Amsterdam, a museum made only of windmills. A quarter-millenium ago, on a dam squared off from Zaanstad by canals, is the birthing place of Europe's industrial revolution. Where there were once a thousand windmills packed tight together, four remain. One of the twisting, creaking propellor-houses, the one known as "De Schoolmeester," mixed the slurry for the very paper upon which the Declaration of Independence was penned.

The Dutch offered fine parchment at a bargain price. Their industry and empire was powered by the wind their coasts braced up in such abundance, geographically untethering makers from reliance on water wheels, while uncontracting the miserable muscles of many serfs and slaves. Rather improbably, the Dutch became an energy cult which ruled the earth by harnessing and learning the finer points of atmospheric dynamics, and with this lever they extended their lowlands out into the sea, using wind to pump out water, going so far as to transform their country's visage on maps. Such was the reach of their agency, and their royal symbol was and remains the orange tree. Dutch primacy would only be eclipsed by the hell-fires of coal, an alien substance to them, one which released far more energy, far more predictably, than wind.

What a regime was coal. I am thinking of southern Provence, where at a villa not far from the winter lair of Richard Perle, we were surprised by a bookish, bespectacled woman who had come down from Birmingham to study what were once the last functioning coal mines in Europe; the shafts at nearby Hely d'Oissel closed in 1962. As a scholar, she thought the mines' importance self-evident. She would explore them for herself, so she could transform their remnants into wisdom. To me, she put in mind all the rail and factory museums in England, where the next major expansion of the industrial revolution ensued after its breeze-kissed delivery in Holland. The copious red brick of the professor's native Birmingham once enclosed naught but teeming machines and workers, blacked with carbon. Over that period, her country transformed the world, tormenting much of it and burning half the coal on earth.

English industry was so amazingly productive, its products so awesomely ubiquitous, so restlessly scientific, that it would bend world language itself with its force. While the reverend Adam Smith walked near the factories of Glasgow, gazing at slag heaps and contemplating the nature, causes, and repercussions of wealth, other natives were swinging cheap sturdy steel blades to hack trails through jungle vines a half-globe away, but every blade bore the stamp of Manchester. It's where the word "machete" came from. Britain's vast wealth and fluency with coal brought mastery over pan-Arabia, the richest source of coal's more potent liquor. Oil. Yet its imperial destiny was wedded to coal, and oil was a mistress it never really mastered or particularly delighted in. England was burdened with an infrastructure almost exclusively configured to burn coal, and at the start of the Second World War, 90 percent of its homes were still heated by it, its trains still ran on it, as many would be right into the 1970s. If coal stoked hell-fires, oil was the scorching fire itself, sunshine liquified and sunk back into the earth, and it was to be the province of another culture with special affinity.

In 1771, George Washington bought 250 Virginia acres because they held oil and gas springs. Blessed affinity, and I am thinking of my favorite gas station in the world. It was under a 50-foot high 'Atomic' sign, set down a side embankment across the highway from the south end of both Sacandaga Lake and the Adirondack Park, where my grandparents had met and, after the War, built a lakehouse they called 'the camp.' It was about a half hour's drive away from their house, which I grew up in, and their hearts were in the Adirondacks. In summers, the Atomic station was a natural spot to fill the tank of my grandparents' conveyance, a Mercury Comet, with its gasoline. The pumping smelled distinct, intoxicating, and permeating in a pleasant way, and I was not afraid, not then, to breathe the hydrocarbon vapors deep. I almost savored them, as I savored being with my grandparents, going to the large reservoir where they could relax into softer versions of their selves. To me, gasoline was freedom and discovery, even unfolding possibility, and the station's store would greet me with the sheltering cold of its ice cream freezer, its garishly colored plastic toys, and the delicious, complex menage of candy smells coming through their bright plastic wrappers. My favorite candy, once I was old enough to fit it into my mouth, was the cinammon-hot ferocity of the Fireball, which I would pop out of its wrapper and into my mouth while still under the looming sign.

The United States of my birth was a self-sufficient energy culture still brimming with oil, a net exporter to other countries, and the gusher was still the defining characteristic of American power. Oil defined everything about twentieth-century America, and it was arguably was the country's true uniting force. Oil took a population already far more mobile than its overseas forebears, in fact vocationally, inherently, and geographically mercurial by comparison, sat them on explosive devices, and set them out onto open roads to have fun. Is it any wonder that, as a people, we're nostalgic for Route 66? That one of our favorite literary decodings is called On the Road? Even amongst my father's father's generation during the time of Ford Model As and Ts, before Kerouac imagined tossing back a drink in a roadhouse bar, the favorite vacation was to get out and see the country, roam the wilderness, and scale the mountains. With a car, and preferably a fast one.

The whole country's built around speed, and that's not going to change. It's right on our national self-selected D4-7 allele, a spot at the DNA drive-in that's a marker for mania. No, it doesn't seem like the system could change if it wanted to, with Congress bought like rouged whores milling around sailorpreneurs. Smart writers I link to and read, smart people I know and spend time with, they largely don't buy that it can change. They say it largely doesn't matter who winds up running this Financial Services Cruise Ship next. Well, now, Merrill Lynch and Citibank selling their bodies to Singapore and the Arab Emirates, that's change without much choice, a deflowering certainly not on kind terms. Not the kind of change we want. Change isn't always a choice. Sometimes it's an empyrean dictate, a verdict from the seraphim regarding the fate of the nephilim.

If there isn't a difference between candidates and possible futures, why is the whole world watching, expectantly waiting on whom we will choose? If there is not such a thing as good government, then why must we have one? This post is long enough already, so I'll follow with a Part Two. Right now, I am thinking about taking off on a beautiful day from Schipol airport, the jet climbing and curving gently over the Zuider Zee. I'm looking down at fields of glinting diamonds on the shore, forty square miles of solar panels like windmills squashed flat, black, and shiny, catching the sky and all the colors of its prism, and sending it into my eyes.

Anonymous said...
This comment has been removed by a blog administrator.
2:59 AM

When all the old energy sources are scraped away and sucked out of this poor planet, it'll be back to wind, and water currents, maybe. Sun. And the corporations will own all the generators, as they are already starting to do in places where windmills are being set up.
The circus - no, the freak show of this presidential race is a hyped sideshow to distract the peepul from the looting of the store...
Wonderfully evocative piece. I'm looking forward to Part 2.

Wow, Iz. You sure you're not an oil executive? If not, maybe you should be! You get it like they do, and they're making so much money they'll be able to own every generator, they'll be sending up self-replicating nano-technologies and weaving solar collectors in space.

I bet one day making your own energy will be as illegal as moonshining is now.

Hey, you mockin' me, man?!
You know, there are people around who are gathering solar energy off the grid. It IS just like moonshinin'!

There is a documentary on the zider zee project, by Joris Ivens called New Earth (1933).

wouldn't think of it. Just trying to get the still workin' as I hear my gas meter pulsing and huffing in this cold weather.

I checked it out, and man that's some arcane stuff! It's apparently more about agricultural speculation, starvation contrasted with throwing wheat away, than about land reclamation. (http://www.imdb.com/title/tt0025561/) How did you come across it?