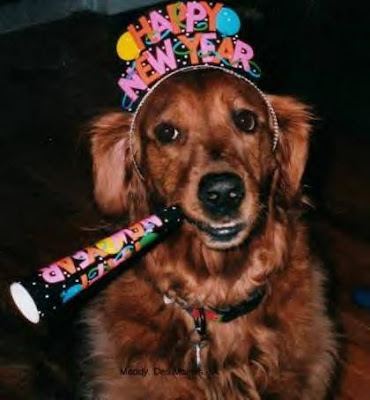 More Wag, Less Bark, And How To Beat Al-Qaeda
Happy 2008! Here's to looking forward to a change in direction by this November, one which will see the world's woes begin to mend. Far from being a utopian sentiment, it's still possible to defuse worse war to come by wise accommodation, application of Realpolitik, and perceptive leadership. As Machiavelli would say, "when my people yield I push, when my people push I yield."

BushCo and Al-Qaeda have a lot in common. They both are condemnatory of the West, and believe its institutions, philosophies, and societies are morally bankrupt, even doomed. Selling Western ideals short is tempting, but the world's future may well not boil down to a binary game of social darwinism vs. theocracy. I'd put my money on Plato over BushCo or even Osama Bin Laden any day, and honoring social contracts, treaties, and binding accords, if such can be accomplished with former friends and enemies, is a far more efficient repository for faith.

First, a state of the current affairs: Pakistan People's Party leader Benazir Bhutto was assassinated in the military fortress city of Rawalpindi in 2007, on a Wednesday evening in December, presumably by those who wish to re-establish a Muslim caliphate. For the past 10 years, the United States has fed a stunt-man in Pakistan billions of dollars to keep things like this from happening, and suddenly, it feels shortchanged. Predictably. Yet predictability is no consolation from having to witness more brutal ineptitude in the short-sheeted Global War On Terror (GWOT), US policies characterized by wooden-headedness, crash-and-burn ignorance, and unswerving arrogance.

"Muslim Domino Theory" analysts are now publicly defining Pakistan as the front line against Muslim extremism (can they say, "Duhhh?"), and the US is sending Special Forces units to train 'Frontier Corps' to keep the Taliban and Al-Qaeda in line. It should be obvious how viscerally sick about 75% of the 160 million Pakistanis are of the US, and how disastrous further efforts to violently meddle in their internal affairs will be. It's like putting out a campfire with gasoline, and the flare of Bhutto's death was the 'whoosh.' She shouldn't have been there in the first place, the assassination was nearly certain to occur, as was the violence and chaos which has followed.

The Bush Administration had brokered a "power-sharing arrangement" between Bhutto and dictator Pervez Musharraf, sending her back (to be greeted by a huge car bomb in Karachi) earlier this Fall. It appears Musharraf forcefully declined the shotgun marriage, and the Wahabist sympathies of his junior officers denote strong complicity. Like chess neophytes, BushCo led and imperiled their queen too early. Neither neo-cons nor realists have any viable option to regain a semblance of control, and they have no Plan B but to send in Negroponte and the death squads. To "bring the evil-doers to justice," as His Lowness monotonously observed, will be next to impossible in 'Afghakistan,' nothing like it was in El Salvador or Guatemala. Attempting to do so will fracture an already fissured country.

So how to prevail, in Pakistan and elsewhere? First, governments wishing to blunt the effects of a strong socio-religious movement would not wave red flags in front of its nose, and would not idiotically attempt to bomb, occupy, and torture its innumerable adherents into submission. Aside from morality, the sheer scale precludes effective use of force. A government or coalition wanting to win would follow a simpler, time-tested course:

What is known as "Al-Qaeda" is simultaneously a very deep-rooted revivalist and nascent protestant movement. It was seeded by long Western occupations and militarization of the Mid-east, nurtured by Muslims reading and interpreting the Koran for themselves, and triggered by internet-age communications. In historical significance and effect, Al-Qaeda is akin to Luther in Leipzig when he kicked off Protestantism, hanging up broadsheets stating that commoners had a right to read and think about the Bible, the existing Church was corrupt and incorrect. Like Luther and his supporters, the Muslim reformers want a return to spiritual purity of thought to exist in their religion's original form, and to reject the grossly abusive, sclerotic theocracies which currently claim authority. Trying to repress these urges is like plugging a pressure cooker.

The Catholic church tried to force the genies of Lutheranism back into their pressure cooker, plunging Europe into a hundred raging years of "Long War" during which it suffered defeat. The Church could instead have chosen to co-opt Luther's movement, dilute his power, and wait for the internal inconsistencies of his philosophy to take hold. Given time, revolting bishops would interpret the Bible differently from Luther and each other, a hundred groups waiting to bicker, splinter, and war. Luther was no stand-in for the authority of a Pope, and the Catholic church might well have prevailed over the Reformation through mere patience. Instead, it hoisted itself, and many but not nearly enough heretics, on its own petard. As a new central spiritual authority and commoners reading the Bible were natural enemies then, so are a caliphate and commoners interpreting the Koran now. They will fall asunder, all the faster by granting them a measure of credence in the meantime.

Just as the Catholic Church was unwilling to accept less absolute control over Europe in exchange for continuing primacy, the US refuses to accept loss of control and pursue a multipolar future. Pakistan represents loss of control, and it will continue to thwart the empire's will. The welcome mat has been taken inside, and much of the islamic world will take its cues from that symbol. America can't stop the looming civil wars there, and can't stop any future national wars against Afghanistan, Iran, or India. Power vacuums get filled, and there's plenty of stuffing already in and around Pakistan.

Rather than fighting a 'Long War,' the US and the West should meet with the Taliban, should parlay with Al-Qaeda, and should make reparations. The Guantanamo detainees should be released, shown kindness, and their families should be lavishly compensated. Troops should get out of Iraq before it gets hot again. George W. Bush should be scapegoated and, at his blessed departure, take upon his head the blame shared by many others, be they Democratic, Independent, or Republican.

Yes, this clean slate approach is a "perfect world," but it is also strategically sound. Al-Qaeda's propellant isn't "hating us for our freedoms," but annoyance at having Western-made spiked cleats on their necks for a hundred years. Moving even conservatively in the direction of Jiu-Jitsu will erode Al-Qaeda's prime impetus, and that erosion spells victory for all sides.
Posted by MarcLord at 1:55 PM

Marc, this is brilliant stuff, both in content and style!

MarcLord said...
This comment has been removed by the author.
8:56 AM

Thanks for the compliment, Vincent. I confess to not feeling very brilliant, and the writing can still do the concept much better. It should be completely obvious, yet rapprochement with Islam can't even be publicly broached. Doing so would be treated as treason, which it now technically is.

OBL was very clear-sighted about the West's weaknesses and how to exploit them. I'm guessing he underestimated the West's ability to adapt, and the power of individual rights.

Yeah, Marc. I almost posted a photo of my aged Dobie celebrating what might be his last New Year's Day with a ham bone on the front porch. But then, I thought better of it. I'm not acknowledging the passage into a new year until 1.20.09