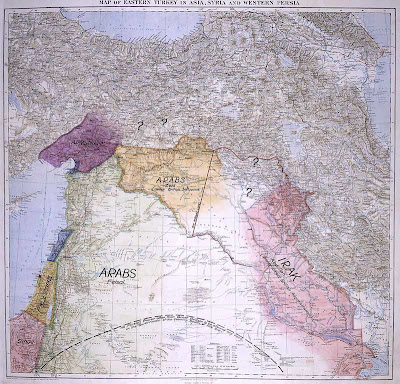 Iraq, Then And Now: The Evolution Of A Revolt
Then...T.E. Lawrence writes from the perspective of a successful Iraqi insurgent against the Ottoman Empire:

"It seemed that rebellion must have an unassailable base, something guarded not merely from attack, but from the fear of it: such a base as we had in the Red Sea Parts, the desert, or in the minds of the men we converted to our creed. It must have a sophisticated alien enemy, in the form of a disciplined army of occupation too small to fulfil the doctrine of acreage: too few to adjust number to space, in order to dominate the whole area effectively from fortified posts. It must have a friendly population, not actively friendly, but sympathetic to the point of not betraying rebel movements to the enemy. Rebellions can be made by 2 per cent. active in a striking force, and 98 per cent. passively sympathetic. The few active rebels must have the qualities of speed and endurance, ubiquity and independence of arteries of supply. They must have the technical equipment to destroy or paralyse the enemy’s organized communications, for irregular war is fairly Willisen’s definition of strategy, “the study of communication” in its extreme degree, of attack where the enemy is not. In fifty words: Granted mobility, security (in the form of denying targets to the enemy), time, and doctrine (the idea to convert every subject to friendliness), victory will rest with the insurgents, for the algebraical factors are in the end decisive, and against them perfections of means and spirit struggle quite in vain."

Now...PFC Damien Corsetti, nicknamed "The King of Torture" and "The Monster" by his compatriots for his enhanced interrogations in Kabul, gave an interview to the Spanish paper El Mundo, describing part of the repertoire:

"They tell them they are going to kill their children, rape their wives. And you see on their faces, in their eyes, the terror that that causes them. Because, of course, we know all about those people. We know the names of their children, where they live, we show them satellite photos of their houses. It is worse than any torture. 98% of the prisoners had nothing to do with either al-Qaeda or the Taliban. In Abu-Ghraib and Bagram they were tortured to make them suffer, not to get information out of them."

T.E. Lawrence was tortured and sodomized in Daraa, Syria while in Turkish custody there. His claim has been disputed by people focused on his unknown sexual practices, yet the treatment he reports was commonplace. Lawrence said his captors were so inept and and sadistic they didn't realize his significance, and let him go. He later assaulted the Turkish-held port of Aqaba from the rear, capturing it in 1917, then was instrumental in throwing them out of Damascus in 1918. He was given every medal in the Empire, but refused a knighthood.

The map pictured above is of Lawrence's personal design, submitted by him to the British War Department at the end of World War One. It hangs in the Imperial War Museum in London. It was drawn with the subtle realities of local topography, history, tribes, trade routes, and cultural peculiarities uppermost in mind. Armenians have their own state, for example, and Saudi Arabia, Jordan, and Syria are given to Feisal, Irak to Abdullah, with a second Arab state to Zeid. Things might have worked out differently had the Brits paid any attention to it.