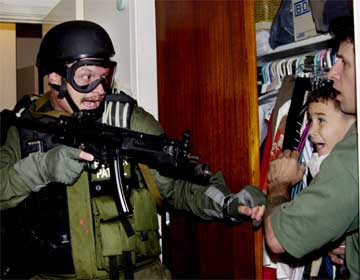 Immigration Officials Detaining And Deporting US Citizens
First, they came for the people with funny names...

Marisa Taylor, McClatchy News - Thomas Warziniack was born in Minnesota and grew up in Georgia, but immigration authorities pronounced him an illegal immigrant from Russia.

Immigration and Customs Enforcement has held Warziniack for weeks in an Arizona detention facility with the aim of deporting him to a country he's never seen. His jailers shrugged off Warziniack's claims that he was an American citizen, even though they could have retrieved his Minnesota birth certificate in minutes and even though a Colorado court had concluded that he was a U.S. citizen a year before it shipped him to Arizona.

On Thursday, Warziniack was told he would be released. Immigration authorities were finally able to verify his citizenship.

The story of how immigration officials decided that a small-town drifter with a Southern accent was an illegal Russian immigrant illustrates how the federal government mistakenly detains and sometimes deports American citizens.

We just can't leave all those Halliburton detention camps sitting vacant and unused, can we?
I wonder when our turn comes.

you have the advantage of being a man of the cloth, right? We'll need you guys in the camps, to keep the spirits up!

Marc--
Fighting the pseudo-christians is tougher than fighting the heathens. As I deal with many Evangelicals, I find myself wondering, "What Book are they reading?" "What Jesus do they follow?"

I feel I may be in the first few round-ups, probably turned in by people who claim to be God-fearing Christians.