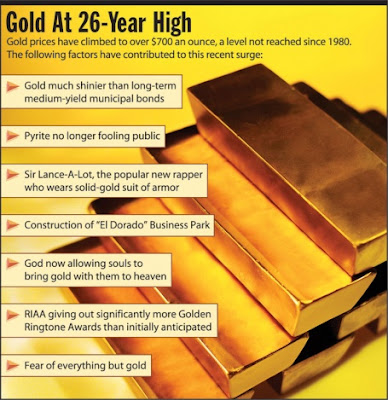 Silver And Gold, Silver And Gold
As the graphic from the Onion above says, are we suddenly in "Fear of everything but gold?" Not quite, but we get the picture. Gold settled at a record nominal high today. The previous high was $825.50, set Jan. 21, 1980, or $2,128.09, adjusted for inflation, according to the Minneapolis Fed Calculator. Official US inflation estimates have been laughably conservative through much of that period, so the all-time high probably clocks in nearer to USD $4-5,000 per ounce in today's value.

Gold, the stock markets, and oil are starting to correlate as as you would traditionally expect, meaning they're starting to move in opposite price directions. This is news because it has not been the case for much of the past several years, when both gold, oil, and stock indices had surprisingly strange correlation patterns. This amongst other things led some observant market-watchers (such as the Canadian Govt. Pension Fund) to conclude that a) US stock markets were being gamed back upwards via derivatives buying, and b) that the US, or somebody, was selling its gold reserves in order to finance such buying.

If those sound like conspiracy theories, one might bear in mind (rimshot) that the Soviets emptied their gold reserves via under-the-table sales in the early 1980s while their armies were fighting protracted asymmetrical conflicts with Islamic insurgencies. Of course our government, being so fiscally conservative, could never suffer a similar fate in a million years. But you do have to put your money somewhere.

There are other places offering relatively good value besides gold. For example, Jay-Z, a popular rapper, is flashing Euros like Japanese folding fans in a music video while Gisele Bundchen no longer accepts payment in dollars. Wholesale drug dealers started switching to the Euro three years ago...which means American intelligence agencies are also now, insofar as possible, Euro-denominated. Meanwhile, the Canadian dollar is at an all-time high, as silver nears its nominal all-time peak. Rolls of ordinary copper wire at Home Depot have nearly tripled in price since 2005.

Not espousing any sort of panic here, just an eye to conservative diversification. Besides, everything's FINE!! The city of Cleveland is allocating $100 million to demolish vacant homes. Plenty of building opportunities there, and the new construction markets are still going very strong in Iraq, Africa, and Central Asia. Citicorp, America's largest bank, may have lost a third of its value over the last few weeks, but it hired former (Clinton) Treasury Secretary Bob Rubin to more effectively grovel for a bailout at the Fed's door. Speaking of the Fed, it pumped another $40 billion shot into the credit markets last Thursday. Best of all, the American economy grew at a faster-than-expected rate, unemployment is lower than expected, and the core inflation rate is clocking in at, oh, about 2% or so. Mother Russia would be proud.
Posted by MarcLord at 8:44 AM

Another ignorant question, perhaps due to kanuckian preconditioning:

1) How would America's economic demise affect the rest of the world?

P.S. the crux of all that pretends morality is material.

Naj, we could use more of that kind of ignorance. Good questions. I'm not an economist, thank god. But here's what history would give as simplified answers:

1) The Rest of the World (ROTW) will end up owning America for awhile. As the huge holdings in bonds and dollars the ROTW holds go down in value, they will seek to convert those holdings. But they can't convert them all fast enough. When they default or devalue extremely, the ROTW will go after the domestic collateral which underpins them. There is considerable potential for conflict over this because of the highly militarized state of the US, but in the end, the debts will have to be paid off. Maybe a consortium of Asian governments will own say, Yellowstone Park for a while.

2) Structurally, US corporations rely more on China for production than the US. So they're quite disentangled, and this may be reflected in the still-high stock market values. But, over time, you've got to have prosperous workers to serve as consumers who drive growth. The policy approach has been to extend easy credit to (ex-)workers to boost consumption. The net US savings rate has been negative during the Bush years. Obviously this can't go on forever, and will come back to slam US corporations and the stock markets they stew in.