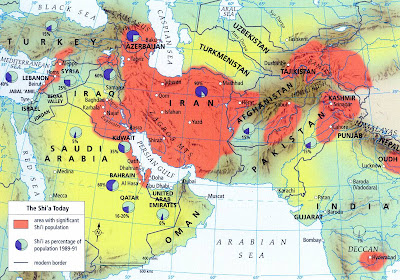 Iran Facts Update, Pt. II: Strategic Fulcrum & Schwerpunkt
(Note: big research credit owed to Church and Empire, since this is basically his post. I'm plagiarizing like crazy below, I'm just not entirely sure yet from whom.)

Washington has now shifted into full "All Iran, All The Time" mode. This should be a big tip-off to what may be coming next. Rumors circulate that an Executive Order has already been signed for attacking Iran. Someone with access to Cheney's office leaked the preferred scenario: an Israeli attack on the Natanz reactor project, followed by an Iranian response against Israel, followed by a "shock and awe" bombing campaign from the US targeting Iran's entire infrastructure, including bridges, utilities, pumping stations, and ports.

While you or I might not think it's a good idea to bomb a country which hasn't attacked anything since the 18th century, and while a bombing campaign is likely to provoke even the dissident Iranians into hating the US, it might be helpful to know why, under certain strategic analyses, "It Must Be Done." And now, I must hand the blog for a suitably brief period to Mr. Paul Wolfowitz:

The War Department is always looking to nip new threats in the bud. That's natural. But the focal point of its attention was further expanded as follows:

...to ensure that the United States - and no one else - controls the energy supplies of the Persian Gulf and adjacent areas of Asia.

The first part of that sentence has been the most basic precept of US foreign policy since the 1950s. In fact, written in invisible ink on the door of the Oval Office is this phrase: Don't Lose the Gulf, Dipshit! (It was a class trip, the tour guide looked away...what can I say?) Now, the Bush Doctrine goes much further. "Adjacent areas of Asia" covers a lot of ground. The Vulcans radically expanded the Carter Doctrine, and turned away from, even trashed, the Eisenhower Doctrine (better known as "Containment"). Amongst other things, the Bush Doctrine clearly stipulates that Iran has to knuckle under. Even if that's impossible.

In short, the Bush Administration wants access to all the oil and gas in the Caspian Sea, which is currently (mostly) under Russian control. Iran happens to be blocking the way of "our" pipelines with "their" pipelines. Even worse, Iran is undermining the Petro-dollar standard by selling its oil directly to countries, for example to Japan in exchange for Yen. Big no-no in Bush World. Chavez is a gnat in that mental sphere, whereas Iran is a bee-hive.

So, having secured the White House and a pretext for wars intended to control pipelines, BushCo wasted no time in taking its spiffy new Doctrine out for a spin in early 2001 by:
The Russians and the Chinese did not miss the significance of these gestures. How could they? Warm spit was dripping off their expression-frozen faces. The Cold War was back on, baby. Following these opening provocations, a sizable, sustained, and fairly successful effort was made to destabilize the goverments of the obscure new countries (sometimes referred to as "Trashcanistans") surrounding the Caspian basin. Then, on May 4, 2006 Vice President Dick Cheney went to Lithuania, and made some rather blunt public statements which could be considered hilarious, insane, or hypocritical, but probably above all rude. Among other things, he accused:
The next day, Cheney flew to Kazakhstan, urging them to:
In tag-team bonhomie, on June 3, 2006, Secretary of Defense Donald Rumsfeld went after China by pointing out:
So they're right. This is a Long War. Whether it should be fought or not is a good question, but the economic prizes are considerable. If you look at a map of new US military bases in Africa and Asia, the correlation with proximity to oil assets is nearly perfect. For its part, China has been extremely aggressive in securing energy resources, often paying unbelievable sums of cash (dollars, of course) for lease and development rights. After Kerry fumbled in '04 they went around the world signing deal after deal...it was like watching Mike Tyson and his entourage on a shopping spree for new bling-bling, only instead of being the youngest heavyweight champion of all time, China is the world's oldest civilization, with trillions of suddenly accumulated dollars to get rid of. In addition, it is willing to fight proxy wars in pursuit of energy reserves and is addressing its biggest military gap by:
Where's Iran in all this? Stuck right between the US, Russia, and China. Geographically, the country:
Bush policies seem almost intentionally designed to drive Iran into Russia and China's arms. China, in particular, benefits from the US shunning and sanctioning Iran:

Russia's designs on Iran are primarily defensive, but the two countries have extensive ties. Russia's perspective:
So if the US could pull off regime change in Iran, it would hit another "Trifecta." Not only would complete control of the Persian Gulf be ensured for a generation, but oil companies would (continue to) make more money than God, and the US would be able to...umm....what was that Cheney phrase again? Oh, yeah: "use abundant oil and gas supplies as tools of intimidation and blackmail."

Now wouldn't those be handy tools to have? A self-respecting Empire wouldn't be caught dead without them. The only flaw in all this brilliant logic is that the Bush Doctrine's distinctive flair for execution has been, to be kind, dubious and underwhelming:
Bottom line, the American Corporate State is bankrupt. By its leaders' calculations, however, taking Iraq's oil cost only a trillion dollars and is worth thirty trillion. A return of 3,000%! The Empire is saved. (Chipmunks demonstrate better math competency.) The pink-red areas on the map above represent ethnic Shia populations. How happy will they be if Iran is bombed...for not having The Bomb? Meanwhile, the Russians and Chinese are solvent, right next door to Iran, and accumulating increasingly large gobs of cash. My friend Jon in Wisconsin recently quoted his drinking buddy Sun Tzu, who summed up the Bush Doctrine and dumb-assed Vulcans pretty well:

“Victorious warriors win first and then go to war, while defeated warriors go to war first, and then seek to win."

With China buying 15-20% of their oil from Iran, and Russia providing nuclear technology, sizzler missles, and Kilo-class submarines, etc, etc, it is hard to imagine China and Russia sitting idly by, while we bomb the snot out of Iran.

The elements are all there. Could very hot. As in the sun. Let's pray not.

I'm reaching out to my favorite writers for a voice.

The source article is by Michael T. Klare. The same guy that wrote "Blood and Oil"

Another guy who is extraordinary with his analysis is F. William Engdahl

Scroll down to his Russian pieces

Thanks for the pointers, Mr. Jesus. It is a privilege indeed to steal from Michael Klare. Escobar is a fairly regular read, will check out Engdahl.