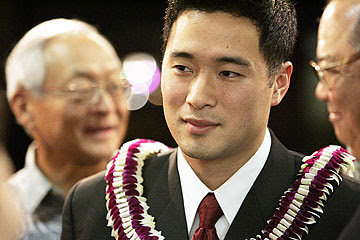 "I feel that we have been lied to and betrayed by this Administration. A crime has been committed against the Constitution. It is the duty, the obligation of every soldier, and specifically the officers, to evaluate the legality, the truth behind every order — including the order to go to war. How could I order men to die for something I believe is wrong?"

Happy Veteran's Day: Lieutenant Ehren Watada
A lieutenant from Hawaii stationed at Fort Lewis was the first officer to do it. He refused to go to Iraq, and when pressured to knuckle under, he made a public statement. The Army threatened him with jail time, and he said "OK." He accepted a 6-month sentence. The Army found that response unsatisfying, so it court-martialled him with full measures of wrath and bureaucratic mendacity, seeking to put him away for six years. Watada stood firm as a kangaroo court stooped to nonsense. Last Thursday, he won his case. I doubt the Army will pursue an appeal, and preferring to devote its energies to keeping the outcome quiet (if you've heard of this in the MSM, please let me know). Via Truthout:

Although the Army issued a press release claiming to "look forward to the opportunity to further explain to the District Court judge the full extent of the protections and safeguards that are afforded to a military accused," (Seattle Times, 11/9/07), anyone who glances at the court ruling will agree that the Army's only lingering hope is to appeal this ruling to the Ninth Circuit Court of Appeals.

Judge Settle wrote "for several reasons ... it is likely that [Lt. Watada] will succeed on the merits of his double jeopardy claim" (Order, p. 22; a copy of the order is attached). The court held that the military judge acted "irrationally, irresponsibly, precipitately" (Order, page 31) in failing to consider feasible alternatives to a mistrial, and there was no good reason to stop the proceedings.

This ruling came after the repeated refusal of the military appeals courts to free Lt. Watada of the burden of a second court-martial. Lt. Watada's attorneys have consistently argued that the military should not be allowed a "do-over." The military judge halted the first court-martial in the wake of admissions by prosecution witnesses regarding Lt. Watada's integrity and statements that Lt. Watada's decision not to deploy was an act of conscience.

Thank you so much for posting this and giving me a heads up. You give me goosebumps more than I'd like to admit with writing like this: "It takes one kind of bravery to storm a machine-gun nest to save what's left of your comrades. It takes another to storm a hostile establishment to save what's left of a nation. A few people have both kinds. Thank you, Lieutenant Watada."

Also, "Thank You Lt." Ehren's support site says this about the Army's response to the injunction, "Incredibly, the Army has announced its intent to file briefs in U.S. District Court to try to prevent the injunction from becoming permanent."

The Army can stick that in their 9th Circuit Court of Appeals and smoke it.

I love giving you goosebumps. (Hey, we all know you're a patriot to the core.) In this case, however, it was unintentional. Was just trying to accurately describe the kind of impact this kid might still have.

The Pentagon is going to try to stop every last word of his story. I'm going to go find somebody at the Seattle paper to email the story to. It should hit the front page as human interest, Ehren should be on the Today Show, the whole thing. As usual, the blogs will be first. ;-)

Ehren for Prez; I hope that the Kennedy Profile in Courage iz His!

Or, a least, the Younger Generation
Lasting Courage Award!!! Funded by Brudda Iz...

Someone, please listen to the Mean Kid Award...He was ahead of his time;