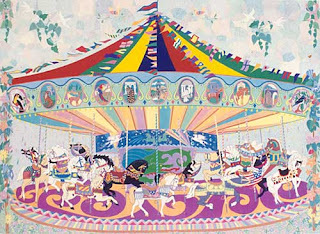 It's All Part Of My Neo-Con Fantasy

L. Paul Bremer, part of the Axis of Ineptitude, somehow got to write an exculpatory, self-serving, ass-kissing editorial in the neo-con-trolled Washington Post. There's a reason I refer to that infiltrated propoganda tool as the "WaPoo," and I refuse to read it or to pay for the publication until the blogsphere spits something good out of it, of which there is admittedly some. Besides the cant and propaganda, I hear they have a fairly nice entertainment section. As part of my education, I had to read issues of the Pravda (to get a decent grade) while the Soviet Republic was eating itself from the inside out. Reading the WaPoo is disturbingly similar, as commenter "peterp" notes over in the comments at Sic Semper Tyrannis:

Today it's Bremer, tomorrow it will be Liz Cheney, the day after Ken Pollock or Fred Kagan -- or, who knows, maybe even Paul Wolfowitz.

Reading the Washington Post op-ed page these days is like reading Pravda in the twilight years of Communism. It's an endless series of communiques from leading members of the Politburo -- all insisting that nothing has changed and the party is still the vanguard of history. Meanwhile the crops are rotting in the fields, the factories are turning out crap that nobody wants to buy and the workers are all drunk on vodka. But the propaganda machine keeps cranking away.

Which is appropriate, since telling fairy tales is the only core competency of ideologues.

But, peterp, let's not allow neo-cons to give fairy tales a bad name. Let's focus on the bright, moral side of fairy tales. Like, you know, "The Three Little Pigs." Like "Cinderella." And let's not forget "Their Asses Are Grasses, And We're Lawnmowers."
Posted by MarcLord at 11:59 AM