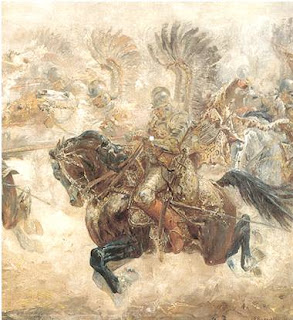 Playing Congressional Chicken With The Lives Of Our Troops
The above is a quote from The Left Coaster, a deft blogger I'll probably get around to adding to the lineup of Caravan-Sanctuaries at right. The most recent post there, "Pelosi and Reid Stumble Back To Point 'A,'" is a good analysis of current events. With war funding, it's obvious a game of chicken has been going on, that the Dims blinked, and it's obvious how much the gang in the White House cares about the professional, volunteer-grunt military: not a rat's ass.

The Democrats, in the abstract and in the cases of a few Democratic members of Congress including Senator Jim Webb, whose son is in Iraq, do care a rat's ass about the military. Certainly enough that they don't want to endanger lives, or politically be seen as de-funding it. So their capitulation on writing another blank check for I-wrack until September 30th, the end of the United States fiscal year, can be seen in that light. In terms of Talking Points and scorched-earth policy, they know what the White House is capable of:

"Our troops have run out of ammunition, and they're being overrun because the Democrats have held up funding."

You probably think that no Administration would be so craven as to hold up bullets to troops in the field. Ha ha ha hah! Guess again, me hordies. The Bush Administration already held up the cheapest, lowest-tech, begged-for equipment for years. They held up cheaper, better, lighter body armor. They held up improved armor and glass on Humvees. These two FUBARs alone, on the most inexpensive of battlefield protections, got a lot of people killed, wounded, and sent into semi-vegetative states, the nether-worlds between life and death.

This past behavior was not mere neglect, but part of a well-established funding pattern. It was triage, a heuristic expression of finite resource allocation along expensive n-best nodes. In English: the troops are low on the BushCo totem pole, and yet more of them would be sacrificed for a domestic political victory. Especially now. To the Bush Administration, they're cheap compared to alternatives.

I'm not holding up the Dims as exemplars of vision, morality, or politics. Far from it. I'm just saying they still exhibit traces of humane contemplation, and with their submission on the Iraq War Funding bill, they recognized they've been out-manuevered by a ruthless calculus. Denying war funding was a battle they weren't prepared to win, and on this issue, Pelosi and Reid now get to retreat, re-group, and learn.

For the record, there already was at least one severe ammunition shortage early in the occupation, and there's one right now, with US police departments not able to get their regular allotments because troops are going through so much of it. In the US commercially, some cartridges now take more than a year to get. This should be telling us a little something about both our free-market supply system and what the troops in Iraq and Afghanistan are experiencing.

According to the Joint Munitions Command at the Rock Island Arsenal, 1.5 billion rounds of small-caliber ammunition were expended in 2006, up four-fold from 2001. That's 10,000 rounds on average in one year for every US soldier serving on rotation in a combat zone!. Almost 1,000 rounds per month, 250 rounds per week, a full M-16 clip and then some every day. That kind of expenditure is higher than in WWI, WWII, and Vietnam. It's the stuff of Zulu Wars, embattled colonial outposts, sieges, and cries of "You're a better man than I, Gunga Din." If they're shooting that many rounds, it's because they're already being overrun.
Posted by MarcLord at 9:10 PM

Congress shoudn't deal with ammunition distribution. But, it should (and is legally required to) deal with the declartion of war (if there is to be one). Only congress can legally declare war. That means there is no legal war. Congress must undo what it has done to provide excuse for battle (and if there be true war, declare it). A US soldier should be backed up with legal and clear reasons for battle. I like this: