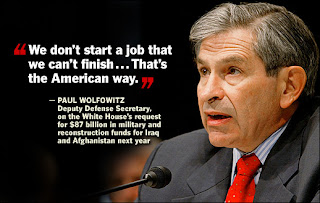 Wolfowitz Tagged, Not Yet Bagged
I've been following this little spitball ever since I first saw his pointy asp-face. I've watched him and his brothers in the Trotsky Fraternity hollow out my country and re-devastate well-pummelled parts of the world while getting a lot of people killed. He is the Teacher's Pet Designate of Leo Strauss, the original Neocon. I've written about Wolfie, most recently on Tuesday ('Cry, the Beloved Wolfowitz') when it became certain he was getting tossed out as World Bank President. Now that the much-wished-for worldwide event has been consummated, I will reach deep to marshal all my eloquence:

In well-established Neocon tradition, Wolfowitz was dragged out of the Bank by his heels, issuing defiant denials, obscenities, accusations, negotiating demands, hissing threats, spittle, and venom all the way. If you've followed this story even slightly you'll know I'm not being hyperbolic in these descriptions. On his way out, he got himself an extra month, a $400,000 "performance bonus," and he had wanted an official, public commendation from the World Bank for his mistress, former employee Shaha Riza.

Riza is from Libya, and was born in Tripoli; her father was a consultant to the Saudi royal family, her mother was a Syrian who still lives in Libya. She studied International Relations and got a master's degree in 1983 from the London School of Economics. Given her close relationship with Wolfowitz, any intelligence agency would automatically deem her a security risk and a possible double agent, and the length of her relationship with Wolfowitz is not easily established.

World Bank officials aren't exactly the least corrupt people on the planet, so you know if they went to such public lengths to be shot of someone, it must've been really bad. Forcing a president out was unprecedented at that institution, which by tradition has had a US-appointed figurehead. Naj at Iran Facts commented that the Bush Administration might install someone even worse. In reply, I wondered if Project for A New American Century member Dan Quayle is busy. And of course another member, John Bolton is free, and could be proferred.

Now I'll use a hyperbolic comparison: Wolfowitz is a human cobra, and you'd better watch the next lair he holes up in. Real reporters and historians should be tailing him like Humphrey Bogarts in The Big Sleep. Where this man goes, hell follows. It's coming for him, but he is not yet fully contained in all its circles.
Posted by MarcLord at 2:03 PM