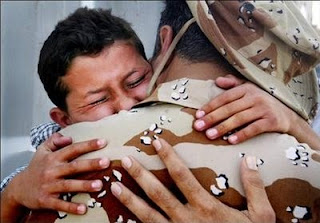 I Think We're Not Alone Now
A widow, a pregnant single-mom-to-be and former Marine who did a tour in Iraq posted her thoughts onto the SanFran Craigslist. She wanted her mourning to be broadcast far and wide, for her hurt to register somewhere, for it to mean something to somebody out here in the void. Her husband's tour was extended for an extra month and now his dead body is being shipped back to her. She's pissed, she's right, and she's facing one hell of a fight, with ugly consequences for the rest of her and her baby's lives. No matter where we go in our system, we'll always see her face laboring in a Walmart, trying to knit the ends together again. I don't know who she is, her name or what to do, except to amplify what she said and hope it'll come back to her in some good way. As for us, we've had time a-plenty to strip away the denials of the entity our nation has become. Here is what this woman said:

I'm having the worst damn week of my whole damn life so I'm going to write this while I'm pissed off enough to do it right.

I am SICK of all this bullshit people are writing about the Iraq war. I am abso-fucking-lutely sick to death of it. What the fuck do most of you know about it? You watch it on TV and read the commentaries in the newspaper or Newsweek or whatever god damn yuppie news rag you subscribe to and think you're all such fucking experts that you can scream at each other like five year old about whether you're right or not. Let me tell you something: unless you've been there, you don't know a god damn thing about it. It you haven't been shot at in that fucking hell hole, SHUT THE FUCK UP!

How do I dare say this to you moronic war supporters who are "Supporting our Troops" and waving the flag and all that happy horse shit? I'll tell you why. I'm a Marine and I served my tour in Iraq. My husband, also a Marine, served several. I left the service six months ago because I got pregnant while he was home on leave and three days ago I get a visit from two men in uniform who hand me a letter and tell me my husband died in that fucking festering sand-pit. He should have been home a month ago but they extended his tour and now he's coming home in a box.

You fuckers and that god-damn lying sack of shit they call a president are the reason my husband will never see his baby and my kid will never meet his dad.

And you know what the most fucked up thing about this Iraq shit is? They don't want us there. They're not happy we came and they want us out NOW. We fucked up their lives even worse than they already were and they're pissed off. We didn't help them and we're not helping them now. That's what our soldiers are dying for.

Oh while I'm good and worked up, the government doesn't even have the decency to help out the soldiers whos lives they ruined. If you really believe the military and the government had no idea the veterans' hospitals were so fucked up, you are a god-damn retard. They don't care about us. We're disposable. We're numbers on a page and they'd rather forget we exist so they don't have to be reminded about the families and lives they ruined while they're sipping their cocktails at another fund raiser dinner. If they were really concerned about supporting the troops, they'd bring them home so their families wouldn't have to cry at a graveside and explain to their children why mommy or daddy isn't coming home. Because you can't explain it. We're not fighting for our country, we're not fighting for the good of Iraq's people, we're fighting for Bush's personal agenda. Patriotism my ass. You know what? My dad served in Vietnam and NOTHING HAS CHANGED.

So I'm pissed. I'm beyond pissed. And I'm going to go to my husband funeral and recieve that flag and hang it up on the wall for my baby to see when he's older. But I'm not going to tell him that his father died for the stupidty of the American government. I'm going to tell him that his father was a hero and the best man I ever met and that he loved his country enough to die for it, because that's all true and nothing will be solved by telling my son that his father was sent to die by people who didn't care about him at all.

Fuck you, war supporters, George W. Bush, and all the god damn mother fuckers who made the war possible. I hope you burn in hell.

(It's not long now until the anger spills over. Big Hat Tip to Deep Confusion for finding and posting the above.)
Posted by MarcLord at 11:29 PM