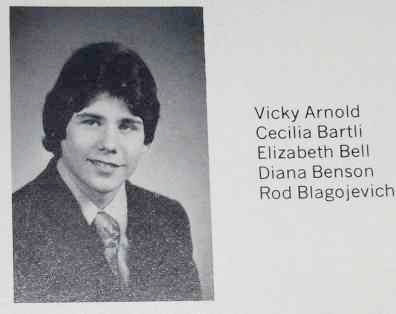 Yes, Ro-Bla made his direct pitch to the Obama folks on November 7th:

And on November 7th, three days after the election, Blagojevich made clear what he wanted in exchange for appointing the Obama adviser to the Senate: the Department of Health and Human Services.

But they missed the back story. You've got to figure Team Obama was thoroughly acquainted with said Guv's distinctive style well before November 4th. They're all cogs in the same machine, and they must've known he was under investigation (if not wiretapped) by the FBI and pit bull prosecutor Patrick Fitzgerald. From Fitzgerald's filing, we know Obama wouldn't play ball on Nov. 7th and thereafter, with the accused grousing, "they're not willing to give me anything except appreciation."

The super-hustling Marcy Wheeler at Empty Wheel is all over it, and put together a time line after reading the 76-page filing. Merging with what facts are available, she doesn't think the time line supports Rahm Emanuel (who took Blago's congressional CD-5 seat over after he left it) whistle-blowing to the prosecuting attorney. I'm not so sure. Whistling would've been Rahm's job as CoS designate to protect Obama, he would've probably known about it, and it would've been overwhelmingly prudent to leak. Blago was persona non grata in Illinois for some time, and Politico naturally asks, "how much was the Obama transition cooperating with the FBI?" Still, the evidence angles miss the colorful mural that looms behind the play.

The real story here is about appearance, change, and enforcing boundaries of acceptable behavior in politics. The Illinois governor will serve as a great and ground-breaking example of Greek tragedy. Reason? He was horribly out of tune with the gods. To Blagojevich, he was simply conducting Chicago (and Bush Era) politics as usual, taking his rightful due. Therefore, his reaction to being arrested at 6AM was "Hahahahaa! Great joke. That was a good one. Alright, who put you up to this?" To the political machine that spawned him, he had crossed the bounds. Someone tipped off Fitzgerald to go after Blago based upon the shiv he was planning (emphasis planning) to stick in before new Illinois ethics rules went effective as of January. And that, my friends, is a high-aperture departure from established standards of political malfeasance. It's like wind sheer, like veer. The details may be decoded or enthralled over by a select few, but the effects to the rest of us in the cargo cult are religious.

Regardless of their level of cooperation or timing, Obama and Fitzgerald sent a big message to Chicago, to Illinois, and to every politician or lobbyist waiting in line to slurp at the Money River: you've got New Rules! Most if not every politician who got arrested in the past 30 years was only prosecuted after their deeds, after getting caught red-handed with courtesans on yachts and cold cash in freezers. Blagojevich doesn't fit that past. Freely admitting my own paltry memory, I can't think of a single exception, and further: the Guv didn't get a dime for all his self-advocacy. Radical departure of standards. The Guv's going down on conspiracy charges, merely for expressed intent. Show trials are cathartic. Yet I ask myself, "What current or former politician does not use at least half their brain cycles conspiring to peddle influence, trade horses, and use their position to enrich themselves?" I mean, Christ, it's what they do.

Busting Blagojevich, whoever did it, is a wake-up call to every sleaze-ball queued up in the system for a stool to slurp on the Money River. His take-down alerts every top-level Secretary, every business interest allocating funds to buy votes, every ward heeler fixing violations with the local Department of Health to be en garde: they're being told it's a crime to even talk about influence peddling. They'll have to devise code. A fish stinks from its head, a rose wafts from its bud. That's the story, and a case like this will shape behaviors all the way down to junior high schoolers choosing to cheat on tests, or study more. This is...new.
Posted by MarcLord at 4:53 PM

Lord-san, that is the best explanation I've read so far. I will post this to After Armageddon News in a few minutes.

Fitzgerald comes out of this standing tall, huh?

Thanks! Feel free to edit it as well, I was indulgent on length. The central insight, that this prosecution is a game-changer, comes too late. But I'll take what I can get. ;-)

Fitzgerald is my hero! He would've bagged Rove, and maybe Cheney if Gonzales didn't leash him.

why should any of that re: Fitz be disappointing? His job is very simple: get convictions. Al Qaeda is real, anti-Americanism is real, and while I don't know which was a false operation or not, not all of them are, and Fitz is just a prosecutor.

I watched the Plame thing very closely, read his briefs, even looked at his budgets. Every one of his cases and actions indicated he was clean on that case, so I strongly disagree with the source's conclusion regarding it. Frankly I'm amazed Fitz even got Libby to spend a day in prison. There was no chance, none, that Cheney was going down, evidence or no.

The other cases lie outside my scrutiny, but I'm inclined to believe terrorists sincerely wanted to blow up the WTC, and more. But I know Fitz is no Giuliani.

The FBI never issued an arrest warrant for OBL for 9/11.

Blago is a stupid man, and his wife seems to be no smarter. How the citizens of Illinois could have seen this asshat as Governor material is beyond me.

Lord-san,
Most likely I romanticized Fitz and you didn't. Which is understandable. ;)

I agree with JR. Blago does not appear to be a man with all of his wits about him. My research tells me he has been under investigation for various and sundry things lo these many years, and yet he has never quite caught that bullet. The sad fact is that this sort of behavior is business as usual in the political world. The big mistake Blago made is he allowed his overwhelming arrogance to overwhelm his discretion. This time that bullet just might make its way straight to his heart.

he's my practical hero, as non-demented and skillful as Prosecuting Attorneys come. The Plame leak prosecution only came via a complete fluke. When Ashcroft was sick, Comey used the opportunity to hand plenary authority to Fitz to go after it. So the WH had to plug the hole with Gonzales. One can imagine the heat Comey faced on that one, and he's the real hero.

When checking out Fitz's case history, I came away deeply impressed. (Check out wiki.) I disagree with your source almost entirely. Also, you'll see that he just got married. =)

he must have some mean black belt in kiss-up/kick-down.

I've worked for people crazier than him. Very little surprises me in terms of defective leadership, because the cultural cues have rewarded naricissistic megalomaniacs. That was the Clinton era in a nutshell. Then we added sociopaths to the mix. When the top of the hierarchy is vicious AND crazy, people like Blago start showing up in positions of power.