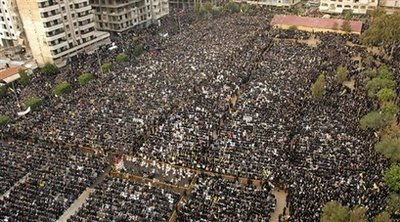 Gaza Protests In Beirut
A juxtaposition of how viciously stupid Israel is being, via Fox News:

The day after Christmas, White House special counsel Charles Colson told the president that the American people needed to hear "some explanation of why it is we're continuing to bomb [North Vietnam], and that it isn't simply an exercise in trying to decimate a country."

"It's too damn bad we aren't decimating the country," Nixon snapped.

"I wish to hell we were," Colson replied.

"We're doing one hell of a lot," the president continued, marveling at North Vietnam's "war-making capabilities." But Nixon added that the North had been "clobbered this time, because...I told [Joint Chiefs Chairman Admiral Thomas] Moorer...'Now look here. May 8th, we mined, we bombed. We did a hell of a lot. And it set 'em back a year. Now, we're going to set 'em back two years."

Nixon then told Colson: "The targets they've had have been really something. Everything, except, of course, we're avoiding civilians. I mean, even -- with all the screaming about civilians, believe me: If we were trying, the goddamn place would be leveled. Leveled!"

"God, yes," replied Colson, who after pleading guilty during the Watergate scandals became a born-again Christian and dedicated his life to his Prison Fellowship ministry.

The next day, talking by telephone with Kissinger, the commander-in-chief said of the enemy: "We gave 'em a hell of a good bang, you know. And I'm glad we only lost two B-52s. That wasn't too bad."

Kissinger pointed out that a loss rate of three percent was "about average."

"We're punishing the hell out of them, aren't we?" Nixon asked.

"Oh, there's no question about it," Kissinger replied. The NSC chief added that the French foreign minister had shared with American diplomats a report from France's consul general in Hanoi in which the Frenchman fretted: "I've just lived through the most terrifying hour of my life. An unbelievable raid has just taken place."

When Kissinger, a former Harvard professor and master courtier, sought to flatter his boss, the president cut him off. "You have shown that you are not to be trifled with," Kissinger told the president, producing a mirthless chuckle from Nixon.

"I wouldn't worry about the people here," Nixon said. "I mean, they're bitching around in the news magazines. Don't worry about it, Henry. It's not all that important. The public isn't that much concerned about all this."

Marc, your analogy is eerily on point. Goes to prove the old maxim - if you don't know history, rest assured it will be repeated.

And the lot responsible for repeating said history are cheerful about it; it's part of their identity and livelihood.
Johnathan Swift, for one, had it all set out in his "Gulliver's Travels". Read Part IV, In the Land of the Houyhnhnms, or re-read it if you think you already have.

eerie it is that one nation could be so blind for so long to another's motivation. They live amongst the Palestinians, yet they don't know them.

Thank you! I'll check it out--it has been a long, long time since reading that, thirty years and more.

Cripes Marc...your Faux News linky goes to an apologist story about how Nixon tried to "limit civilian casualties in Vietnam." Whatever.

Great piece. I linked this and the one below. Thanks for doing all the hard work.

yep, and that was the great thing about it. Fox News puts it out there as a kind gentle Nixon, when right in the transcript he's talking about decimating the country.