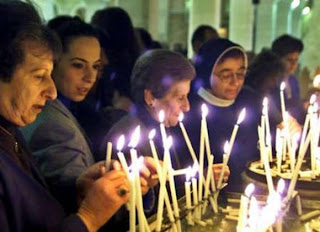 Professional observers firmly believe there won't be serious progress on Palestine and Iran. Who could blame them?

With Palestine, zionists will reject any objectively fair (or do-able) two-state solution. Ditto the involved and aggrieved muslims, which include those of greater Arabia.

With Iran, the zionist position is even worse. Israel will knee-jerk into war if Iran develops its force projection capabilities, and nuclear deterrence doctrine (mutal assured destruction) doesn't apply well to any scenario which includes technically advanced muslim states. That's why Israel doesn't want any, as each would bear a legitimate existential threat. (Note: If you run into a zionist, just mention the words "nuclear Iran," it's really all you have to say. Then sit back and watch the show. Free entertainment, for hours!) Meanwhile it's easy for Iran, and fully within its interests, to keep up deniable pressure on Israel's backside.

Obviously, Israel's the diplomatic problem to solve. It's a poison to three-quarters of US bilateral relationships on the globe, its people have suffered from an abiding and deepening insecurity complex from the reign of King Zedekiah onwards, and its policies are, at this juncture, politically pathetic and suicidal. Policy which relies on keeping nukes away from Iran is doomed to deadly failure. They're going to have them soon enough. Policy which relies on running a national ghetto generates greater backlash the longer it goes. So much so, it supports the argument to not open the gates. (Apres moi, la goy-luge.) What on earth to do...oh! Wait! I know! Let's obviate Israel's need for nuclear weapons?

President-elect Barack Obama plans to offer Israel a strategic pact designed to fend off any nuclear attack on the Jewish state by Iran, an Israeli newspaper reported on Thursday.

Quoting an unnamed American source close to Obama, Haaretz daily said Obama's administration would pledge under the proposed "nuclear umbrella" to respond to any Iranian nuclear strike against Israel with a U.S. retaliation in kind.....

The latitude for unilateral Israeli action might be limited by a U.S. nuclear umbrella. Similar Cold War treaties -- NATO in Europe, the nuclear umbrella over Japan -- defended U.S. allies while obliging them to get Washington's nod for military moves.

The article was intentionally leaked by Obama, laying an impressive new groundwork:

1) he offers Israel what they already have, but in a new and very reassuring way. It takes pressure off them and creates wiggle room for quid pro quo without giving or taking much away.

2) he opens maximal manoevre room with Iran, including a lifted embargo. Do we want US companies to supply Iran with nuclear plants, or do we want the Russians to get the work?

3) Which, by the way, the Israelis have been sucking up to Russia hard, via detente with its client state Syria. Obama one-ups that move, and says, in effect, "Don't twist your forelocks over Iran. We'll vouch for them. And we're still top dog in the region."

4) Iran's first quid pro quo would be to stop Hamas and Hezbollah with the bottle rockets in Palestine, feeding into a more stable framework there.

As you know, I've long viewed Clinton as SecState in the (for my first time ever, positive) light of Obama making an immediate run at de-escalation in the Mid-East, a.k.a. Peace. The temperature will lower, and the ambition is now confirmed. I realize the words above do not in any way spell out "two-state solution," and given the actors and history involved, skepticism is warranted. I'm mainly encouraged because the statecraft is of the highest quality. Obama's cabinet has betrayed itself as being able to think wisely in multiple dimensions, the hallmark of great diplomacy, the X Factor in international relations. It makes a far bigger difference in outcomes than war, even when accompanied by war.

For example, if Edmund Burke had been Prime Minister rather than the over-reaching, ham-fisted simpleton Lord North, America would not have revolted, and might have remained part of England's Commonwealth to this day. Parallels between North and his Tory Party's bungling bellicosity and Bush and his Neo-con Gang of Pugs, although someone should write a book about them, they practically draw themselves. The one-track-mind diplomatic methods common to both cabals come in a black box with electrodes attached.

We should be thoroughly cheered by the deftness of Obama's first Mid-East overture. Call me starry-eyed, but when I say, "Peace on earth, good will towards men" this holiday season, for the first time in a great while--for the first time in my adult life--I'll know my government means it.
Posted by MarcLord at 2:37 PM