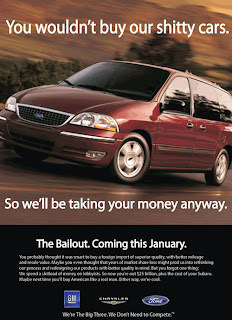 GM Takes Out Full-Page Ad In Automotive News
"You wouldn't buy our shitty cars. So we'll be taking your money anyway. The Bailout. Coming this January."

That's how the ad could've read. In its own way, the actual one was much better, titled: GM's Commitment to the American People. It would be wise to practice and master this particular form of contrition: "We know, we screwed up. Now we really, really need 18 billion dollars. Even though we've still got 16 billion in the bank."

The crowd from home plate on up to the peanut gallery was, you might say, a bit underwhelmed. GOP congress-critters worked up the spunk to actually heap a helping of scorn and derision on Dick Cheney for asking them to become communists. (Get used to a steady diet of those. Dick.)

Actually, GM would probably be ok if it hit Chapter 11, so it just needs a bridge loan, like, I dunno, maybe from a bank that has just shared in 4 trillion dollars of largesse. GM has some good models like the Malibu and Impala, can restructure a couple brands, and can bring in good models from subsidiaries where people haven't forgotten how to build them, such as Opel-Europe and Saab. All told, they probably need $5-8 billion before the Volt comes on line, which is an electric car powered by gasoline. (Don't ask.)

Ford probably doesn't need a bailout at all to avoid chaptering, with a stronger model line and high-quality small cars it's already bringing in from its European sub. It also owns part of Mazda, which it could sell without much difficulty. But Ford would feel quite snubbed if GM got a bailout, and it did not. It might fail out of sheer pique, just to get back at us, so look for something in the $4-6 billion range, with concessions of a green nature, and promises not to bust the union too openly or ship all production to Malaysia.

Chrysler? It is, in the Catholic sense, beyond redemption. It has no compelling models coming online, no far-off subs to get them from, no reserves, just liabilities. Daimler-Benz paid billions to be shot of it for good reason. There's talk of forcing GM or Ford to merge with it in order to save the doomed, lobbyist-chocked private equity firm ("Cerebus") which was dumb enough to buy it from Daimler, but whoa-ho. When you're drowning, you don't catch anchors.

So there's the quick-n-dirty state of automotive affairs. Please don't actually believe any of the above, your mileage may vary, etc. I've just always loved cars, and will mourn the loss of these once-glorious enterprises which made some of the best, now become wart-nosed, blinded, degenerate albatrosses. And someday I'll get around to writing about our new Honda Fit.

(Update: I'm about as flip-floppy as the rest of the country on the bailout issue, with 47% for, 42% against, 11% undecided. Cars have killed and maimed more Americans than the total casualties of all US wars, one hit me in a crosswalk in LA, one permanently messed my neck up in a rear-ender. Yet it was cars which first united the US as a country, and they remain the building block of our present structure. Transitions away must be gradual, and add to that the fact that England, France, Germany, Italy, Holland, and Sweden amongst others all bailed out or nationalized indigenous failed car companies. Car industry is heavy industry, the engineering know-how can be readily harnessed to other purposes, so we should be solidly in favor of a limited, controlled bailout (let none dare say Nationalization.) Amazingly, it looks like Congress will be of the same mind.)

Most people are surprised to hear the bailout's are affecting insurance rates. Insurance is changing as we know it due to the economy and bailouts. Since then the rates have drastically changed. All leading companies have changed lots of policies. When was the last time you researched insurance rates? You'd be surprised what recently changed!!!

A. Peasant said...
This comment has been removed by the author.
6:04 PM