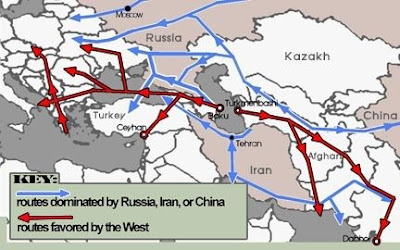 All The News That Eventually Gets Printed
An enraged George Tenet, drunk on scotch, flailing about Prince Bandar's Riyadh pool, screaming about the Bush Administration officials who were just then trying to pin the Iraq WMD fiasco on him:

A servant appeared with a bottle. Tenet knocked back some of the scotch. Then some more. They watched with concern. He drained half the bottle in a few minutes. "They're setting me up. The bastards are setting me up," Tenet said, but "I am not going to take the hit."

"According to one witness, he mocked the neoconservatives in the Bush administration and their alignment with the rlght wing of Israel's political establishment, referring to them with exasperation as, "the Jews."

From the prologue of Patrick Tyler's forthcoming book, A World of Trouble, about America's curious relations with the Middle East. (And hat tip to Jesus at Church and Empire, right margin.)
Posted by MarcLord at 7:44 AM

This scene has the ghost of Hunter S. hovering over it...darkly comic, but deadly serious.

That's what I loved about the anecdote, how petty, how kinked, how horrifyingly real. Oh, would that Hunter S. had covered the Mid-East. I wish he'd been able to bear what he foresaw a little better, and ended up traipsing through Kuwait, Baghdad, Afghanistan.

Apparently only he had the ability to portray just how bat-shit crazy, to borrow his term, the US's cluster-fuck in and of that region. With ample opportunity, no one else has done it.

thanks for the tip-off, just off to read it now. Have been a fan of Robert Reich's since I was a kid and read 'Tales of a New America,' in which he convinced that America's cowboy mythos and gunfighter self-image were going to flame the country out.

And on a trivia note, my mom used to be his baby-sitter.

Robert Fisk is an excellent source regarding the Middle East.

used to like him very much, but haven't read him lately, probably because I've been swallowed in the blogsphere. Where do you get him at?