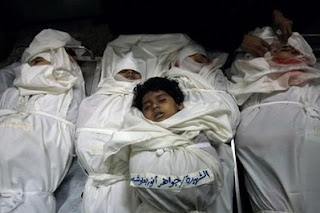 Israel: The Gift That Keeps on Giving
So, the peace on earth thing is a problem. Israel's attacks in Gaza are now targeting buildings that are "symbols" of Hamas. (BBC outlines some of the "symbols.") Hamas is learning from the awesome IDF prop machine, and is getting pretty good at PR themselves, which accounts for the picture above getting into the Western press--no reporters are allowed in Gaza. Whether the five dead siblings are staged or no, a thousand innocent Palestinian natives have been killed and maimed by indiscriminate bombings because, according to the IDF, some recent mortars and rockets were allegedly launched into Israel which caused no casualties.

The Guardian reports that the Israelis have been planning the assault for six months, and relates a few other confirmations of previous suspicions: 1) It's about the election in February, so Likudniks can hamstring the moderates; 2) The operation is punishment for the Lebanon/Hezbollah disaster; 3) The Israelis moronically believe it will weaken Hamas, rather than serve as a powerful recruitment tool, and 4):

The three weeks before Barack Obama's inauguration were Israel's last chance to assume automatic diplomatic support from Washington, as it got from George Bush over both West Bank settlements and the Lebanon war.

It is hard to imagine an Israeli government testing Obama, whom it views with foreboding because of a sense he has more sympathy for the Palestinians, with a crisis of these dimensions during his first days or weeks in office.

And, in the NYTimes: "Obama Defers to Bush, for Now, on Gaza Crisis." Obama's reaction will be cool and measured, disapproving of the loss of life and implying Israel's action was too strong, and then salving it with recognition of being an important ally with a right to defend itself, yada-yada. This probably screws chances for any West Bank/Golan Heights/Iran progress for some time.

When analyzing Palestine one should bear in mind that to avoid an unfavorable settlement hard-liners in Israel would quite literally shoot rockets at themselves. As that as a political solution, Israel makes about as much sense as would sending my descendants back to rule Ireland 1,900 years from now because they have a special stubborn gene.

For the record, Hitler and his planners engaged with Zionism as a way to get rid of the Jews in Germania, but sending them back to Palestine struck them as unrealistic in both short and long terms. (See, amongst others, Hannah Arendt's 'Eichmann in Jerusalem' and Paul Johnson's 'A History of the Jews.' Influential rabbis collaborated with the Nazis in the belief it would speed their return to a lost ancient homeland. Through a round-about of horrors, it did.) Britain and the US chose not to predict mayhem because Palestine was an Arab territory, not a state, and because aggrieved Jews had become their problem.

While Obama will strive to keep his personal feelings out of diplomacy in America's best interests, he has studied apartheid and genocide, and disapproves mightily. There is reason to think his patience with Israel as presently composed ran out as long ago as mine, and he may even realize that country has outlived any meaningful utility as a US ally. Further, that it's tied to our interests like an anchor to an ankle. Am I projecting? Sure, but Obama's smarter than me, and if I can put it together, he can. A dispassionate Realpolitik analysis will yield a similar conclusion, and that these Gaza attacks are intended to push Obama into a dunce-cap wearing corner. Such that if he's nice, his advisors can hand him a piece of chalk, so he can proceed to the blackboard and write "I love Israel" 500 times.

Update: Another interesting "News Analysis" in the NYT suggests the Israelis' primary goal is to show they're no paper rabbi and to reestablish fear across the Arab world after the Lebanon disaster.

Update 2: the WaPo has an editorial pointing out that any gains against Hamas are likely to be small or none, while these attacks undermine the efforts against Iran's nuclear program. Also, Turkey and Syria have canceled their negotiations with Israel.

Update 3: For another US propaganda defeat, a significant bomb being used by the Israelis is the US-made and supplied GBU-39 guided bunker buster. It was Hezbollah's skillful concealment of bunkers which defeated their incursion into Lebanon, and my guess is their plan is to identify those bunker sites and lawn-dart them with GBU-39s.
Posted by MarcLord at 7:48 PM

My biggest fear is that Bush still has three weeks in office. I thought his "pre-packaged" bankruptcy of the American economy would be his last act, but no! We have his executive order allowing any organization or person who doesn't like sex to refuse to fulfill their professional obligations when it comes to anything other than abstinence counseling. And now we have this.

Bush has had two agenda items from Day 1: one - give the big corporate world everything they have ever dreamed of; and two - give the Southern Baptists, Southern Methodists, Pentecostals, and Mormons their collective rapture.

Karl Rove has argued for years that you only need to govern for 51% of the country. Business got fat and dividend happy. Then during the downturn, the "smart" money got "bailed out." On the religious front, the "Saints are Marching In." If I were Israel, I would be very worried. The cheek-turning folks need Jerusalem to burn baby burn for their investments to pay off. And the "Smart Money" has followed Halliburton's lead and relocated to Dubai.

And perhaps a 4th objective would be to rope Iran in all this to make "peace" in the middle east even more difficult.

The Zionists live off of chaos and misery ... may Zionism be WIPED OFF THE FACE OF PLANET!

By the way, I have been hearing Israelis wishing to "wipe off Hamas" (and i read Palestinians) in the little sound bites that make it to our media .. no one is protesting about Israeli wipers!

Naj...You are the Mid East Vox we all need, sanity in this Time; All voices need to join with an emergency to settle a crap shoot for all time, Eternity; this is the time to boil "it back" for the Future Armories are joining, tempers are boiling, what does it take to think of our PROGENY??? What is Pregeny?? Let's get Sensible!!!

Have we all forgotten: the purity of a MOTHER'S HEART??? Je Suis, I am Maman, Oweey, pour vous!! Tros, Trieste!!! A BandAid for All time!!! Naj, let's forge a new STORy For-ill Time!! Je ne Sais Quoi?? Perhaps a vous!@ Pick up the scraps for my progeney (new phase!) I will burn bridges for this, I am a female Knight undiscovered...Try Me!!!"

In this country, to criticize Israeli tactics or to express concern over their policies of bombing the crap out of Gaza everytime they get the wild hair, is to be labeled anti-semitic.

So be it. Israel is wrong, wrong, so in the wrong, just like they usually are. I have a hard time rooting for the guys with the jets and bombs and superior firepower.

In this country, to criticize Israeli tactics or to express concern over their policies of bombing the crap out of Gaza everytime they get the wild hair, is to be labeled anti-semitic.

So be it. Israel is wrong, wrong, so in the wrong, just like they usually are. I have a hard time rooting for the guys with the jets and bombs and superior firepower.

"When analyzing Palestine one should bear in mind that to avoid an unfavorable settlement hard-liners in Israel would quite literally shoot rockets at themselves."

I must say, I admire your ability to maintain the realpolitik stance about Obama. He strains credibility to the breaking point with his silence.

Jews who accuse anti-semitism make should be careful: the word "semite" refers to all peoples of Mid-East origin.

Semite is from the word "Shem," one of the biblical sons of Noah, and Abraham's grandfather. Abraham, son of Arpachshad, was father of both the Hebrews and the Arabs.

So one can be very pro-semite while openly reviling the filthy, racist, murdering Jews in Israel.

Israel is beyond "worried." It went into Nazi Nightmare realm.

One president at a time, he says. True, but the restraint is hard to take.

He will seek to change Palestine's framework. Also, if you're into Realpolitik, this is how Israel opens up negotiating room in advance of a President they're very much afraid of.

"No one complains about Israel wipers."

That may change. What does the relationship with Israel bring the US? The Suez Canal was once the reason for military alliance. Israel is a concrete block tied to America's foot.