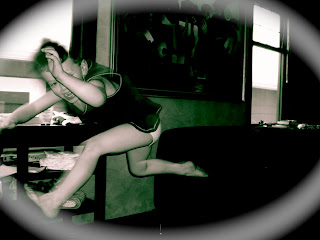 2008 Holiday Retro-Prospective
Schools closed in Seattle on Wednesday, December 17th because of predicted snow. None fell until the morning of the 18th, and by that evening accumulation began to close the airport. I drove my delayed-arrived mother-in-law home through a welcome slide-o-matic. Snowstorms here are an excuse for ataraxy because we are ill-prepared, and they usually pass quickly. But it kept snowing, snowing for days straight, and the holidays became compulsory. Lord Running Boy got a birth-cousin on the 20th, so we housed the newling's two brothers, aged 1 and 4, for 76 hours. At one point 14 snow-bound souls were in the house, and I contemplated fleeing to a Motel 7. Schools were closed for 16 days, and Santa's other reindeer, FedEx and UPS, first started delivering on New Year's Eve; and the packages are still straggling in.

As a city and a nation, circumstances dictate what we don't really don't want to face. By common and unspoken consent, we were determined to have one last great holiday season, and reined things in as little as possible. Let us not consider the foreboding vagaries of Christmas Futures, but revel in our rituals, our instinctive motions, and perpetuate the myths of beneficence from a North Pole. I had to explain multiple times to the #1 son that such a destination is impossibly remote, impossible to drive to with our car. That no runways for a plane exist there, even a helicopter lacks a fuel payload to reach it, and besides, it's a secret place, with casual visitors, particularly the fathers of strong-willed yearning boys, forbidden. He's still ruminating on letters of introduction and the journey's mechanical means.

Weird weather here. At one point, a wind gust picked my 20-foot aluminum extension ladder clear off its hooks on the fence and threw it down by the side porch, sheared a neighbor's tree limb off and cast it 30 feet east to shatter over the stones of the back patio, and blew the firewood clear off the porch. It must've been near a hundred miles per hour, and it knocked the power out to a few thousand homes and businesses, but we stayed lucky. Even more strangely, 'It's a Wonderful Life' was nowhere to be seen on cable on Christmas Eve; given that its plot centers on financial ruin and the contemplated suicide of a well-meaning banker, you'd think it would've been topical this year, but it had been supplanted by the more glib, BB-gun focused 'A Christmas Story,' which ran for 24 hours on TBS. (Jimmy Stewart's legacy was on nationally, according to Time magazine, but was out-rated by CSI: Crime Scene Investigation.) Perhaps an age has passed, I thought while pressing through the channel menu, hopefully not mine.

I came across a television interview with Seattle's mayor and Grand Jowl Master, Greg Nickels, who gave his own road maintenance efforts a "B." Hmmm. To my knowledge he has yet to be assassinated, true, but if the faculty of a law school had been tasked with keeping roads open while debating the environmental impact of snow-plowing and graded each other's performance on a curve, it would've been progress. Seattle's 13 snow plows (Portland, to the south and nearer to the Pacific, has 50) use rubber plow-blades which compacted the flakes down into icing 3-6 inches high, enshrining tire-ruts for the duration. They spread sand on top, spewed an ineffective salt-free de-icer, never cleared side streets, and simply gave up after a few 12-hour shifts.

Therefore, the conditions were absolutely perfect for four-year olds waiting for Santa, for youths butt-surfing on garbage can lids down the steep streets near our house, for the way purple, green, blue, red and yellow lights shine in the dark above the illuminated crisp and crunch, and for playing with the inflowed largesse of elves when you have nowhere to go for days. With the aid of tire chains, rally-style driving, egg nog and extra liquor, a great Christmas was achieved. It was fun, it was infuriating, it was memorable. Due to the needs of high-energy boys cooped up in palaces of Ganesh, to fatherhood, the feeding of people and building of diaper pyramids, it was the near-death of blogging for me.

They picked up the garbage can today for the first time in three weeks. The streets are clear. The stacked cardboard, the bags of gift wrapping, and the mounds of recycling tentatively sidle up to a New Year. Welcome, 2009, and we are wary. Hail Mary, full of grace: help us win this stock-car race.

13 snow plows for the entire city? Wow. I've had that many snow plows in front of my house, malevolently idling their engines, just waiting for me to finish shoveling the end of my driveway so they can fill it back up with ice.

8 guys from Wisconsin would've had this thing covered. When the mayor was bragging about 12-hour shifts, I smacked my forehead and said, "Ah! There's the problem!" Where I'm from, the snow crew simply worked straight until the roads were clear.

Richmond VA is the same - it rarely snows here, and when it does, you would think it were armageddon.

If I had 14 people stuck in my house for even as long as 5 minutes, I would have to be taken to the top floor of the local loony-bin. I applaud you, sir! :)

That's where I am now, mobile-blogging.

And it just snowed another 4 inches tonight, which means schools will probably be closed tomorrow.

I guess your holidays were white? And hopefully nice.

As far as "It's a Wonderful Life" goes, the movie became ubiquitous partially because the copyright on the film was not renewed, so PBS and other budget operators would show it ad nausium.

But then, lo nad betold, someone discovered that a song in the movie had indeed renewed it's copyright until Mickey Mouse himself falls victim to copyright expiration (read = never). So say goodbuy to freedom from copyrights, and goodbuy to George's house, bank, angels, and true love.

So every time the song is played, an angel loses its wings.

Thanks for the explanation.