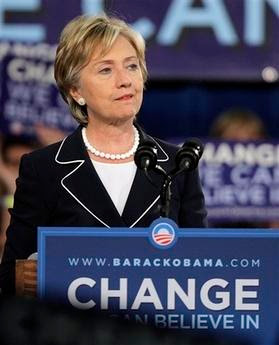 Hillary Clinton Plays Fill In The Caption
Quickie post, just saw this over at the excellent Born at the Crest, which I've come to rely on for news compression. Actually, I don't know how the blog keeps up its always concise, precise analysis folded down into short, info-rich posts. Thanks for doing your thing, Mike, linked to in the right margin.

Hillary's expression fits with some lyrics in that old Judy Collins hit song, "Send in the clowns. There ought to be clowns. Don't bother, they're here..."

Isn't it rich?
Isn't it queer,
Losing my timing this late
In my career?
And where are the clowns?
There ought to be clowns.
Well, maybe next year.

That, and she seems to be saying the F-bomb to herself, or to the crowd in general. But she's an old political trouper, she will survive, and I hear she's slated to give the keynote at the Democratic Convention.