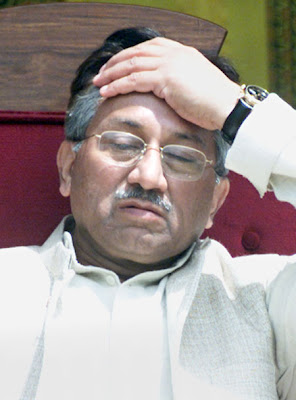 The sourced rumors seem to be that Musharraf is set to quit. (WaPo, Reuters, AFP) His spokesman came out with a denial this morning, but resignation seems to be the direction it's going. (Via MikeVotes)

What's surprising is how long Musharraf has been able to hold on as America's advocate and ride herd on internally conflicting sets of stakeholders. As a measure of what "conflicting" means, he survived 6 known assassination attempts and uncounted plots. He finally ran out of magic, and sometime earlier this year Pakistan simply ceased to play its role as a payrolled ally in the Global War on Terror.

Even with an exceptional talent like Musharraf, Pakistan's value against al-Qaeda has always been precarious, and latent support for that movement is about to be expressed with much greater openness. Musharraf could feel the incoming tide, and was just buying time; he already was estate-shopping on the Chesapeake Bay last year. The reasons Pakistan implicitly supported AQ are quite simple: Pakistan exists because it won a war of self-determination, it is an Islamic-moderate nation, and, after a Mid-east fashion, it is a democracy.

Members of its intelligence service (the ISI) have long worked with al-Qaeda (the Islamic Foreign Legion), and while they maintain cordial relations with counterparts in Saudi Arabian services and the CIA, there is an emotional component missing in the latter relationships. The ISI is practiced at playing multiple ends against the middle, as their only enemy of real concern is India. But when the ISI sees al-Qaeda, they see people like they once were, people who are fighting for self-determination, who are trying to overthrow oppressive regimes and replace them with more equitable systems. They believe that if AQ succeeds, particularly against the Arabian regimes, that good will have been achieved.

The only way to guard against that fondness was to give them massive amounts of money. Now they see the milk has gone out of the cow, so they realize how tired they are of keeping the capricious, volatile idiots in the US happy, with the long subterfuge and denial of better selves that entailed. Indeed, many of the smartest ISI people already felt that way for quite some time, and although it is commonly accepted that the planning, staffing, and financing for 9/11 occurred in Afghanistan, it was happening in a far more powerful way in Islamabad.
Posted by MarcLord at 2:12 PM

I claim no expertise in these convoluted matters, but I find it a difficult piece of mental gymnastics to conflate support of the return of the Taliban to Afghanistan with a longing for "more equitable" systems. I may be a victim of US propaganda, but isn't just about anything better than having them back?

In short, no, but thanks for taking exception. The Taliban suck to the Pakis, yet they're also very useful, like mercury once was as a cure for syphilis. Dumb but effective proxies for al-Qaeda against all comers. Convoluted? Yep.

In Afghanistan no short-term hopes for more equitable systems are entertained. It's Injun Country, an ungovernable wild card not Arab, not Persian, not Aryan. The best which can be realistically achieved is to balance and contain sustained low-level conflicts. Probably part of the reason Afghanistan has been in that kind of war for more than 30 years, and the T fit right in.

To the Pakis, Afghanistan is a buffer region and low-level threat; to them, the Taliban are acceptable so long as they are pointed West. They wink at the primitives because they see Iran as an emerging, potentially existential threat. Plus the Taliban is a volatile, tribal, devolved form of Al-Qaeda which controls significant portions of Pakistan, they're an internal threat which can't be dislodged and has many sympathizers outside tribal border provinces like Waziristan.

The thinking is, it's better to appease the Taliban than to allow a big vacuum the Northern Alliance or Iran might fill. The Pakis don't want superior opponents on both East and West, so treaties was signed with Taliban tribal provinces on both sides of the border.

The obvious question is, what if the Taliban succeed? Ceding some territories to them would be unsavory in the short term, but probably wise in the long. The Taliban would soon enough generate their own serious internal dissent which could be aided and armed. Until then, no one can govern the Taliban.

Phil: I forgot the biggest point:

The US forcibly exterminated the more competent AQ project in Afghanistan after 9/11, and leaving the TB in place. So to the Pakis, the Taliban's ascendance is our fault, and they have no alternative but to use the second team.

a little token of my appreciation of your blog