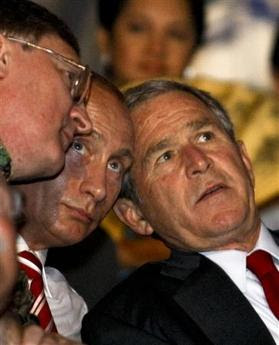 Georgia, And Pipeline Wars, Ain't On Our Minds
As Russian air and ground forces routed Georgian troops, a multinational, extended-leader party in Beijing recalled the opening of Barbara Tuchman's 'Guns of August 'a century ago, when a memorial for Queen Victoria called potentates and their courtiers together. Vladimir Putin and George W. Bush sat next to each other at the Beijing Olympic ceremonies, watching the marvelous, jaw-dropping festivities. Before the Great War, boyhood friends, relatives, and classmates like Nicky (Tsar Nicholas of Russia) and Willy (Kaiser Wilhelm of Germany) tried desperately to avert cataclysm while overestimating their own capacities, in denial of the powerful new political bodies their privileged heads were connected to. They were schooled in King's English, and their telegraphs to each other in late July and early August of 1914 hint at the tangled disconnects they failed to bridge.

War has come to Georgia, and Russia is being demonized in our press. To understand the backdrop, you'd have to hear about the Rose Revolution, one of the many color-coded efforts soft-financed by the CIA. It succeeded in Georgia five years ago, and former Russian ambassador to the US, Georgian prime minister Eduard Shevardnadze, was deposed and replaced with Mikhail Shakaashvili. There were a number of destabilizing factors. Well before, two of its northern provinces had seceded by vote, and those citizens had been receiving Russian passports and aid but were still claimed by Georgia as territories. A major pipeline, the BTC, was built to cut through southern Georgia to carry oil to Ceyhan in Turkey and then on to Israel. Meanwhile, the US was forcing a vote to include Georgia and the Ukraine as members of the North Atlantic Treaty Organization, a provocative equivalent of Russia arming Puerto Rico and the Dominican Republic with nuclear missiles and having them join the old Warsaw Pact.

The US was trying like hell to bring the former Soviet satellites into its orbit and capture the energy resources around the Black and Caspian Seas. A year and more ago, I predicted that the BTC pipeline, financed by a consortium led by British Petroleum, could be taken whenever Russia wanted it. There was nothing in the conventional arsenal to stop them from doing so;, Georgia has been a Russian province since the time of the Tsars; Josef Stalin was born there; and putting a Western pipeline through it was an act of idiotic hubris. Only a bunch of greedy, incontinent, knee-biting poltroons would have tempted an effective ruler, one occupying a superior position, with such effrontery.

If Georgia had already been a member of NATO when Russia attacked, it would have precipitated a World War, one fought with nuclear ballistic missiles. NATO's other option would have been to back down and cease to be an effective actor on the world stage, a fate which it may now weigh in lengthy, commodius privacy. Putin chose to forestall the worst consequences of NATO's continued expansion, waiting until the US-led tide began to recede, and took the break-away Georgian provinces by force. He had the optimal time and ground. In all probability, Russia will control the new pipeline, and not only that, but all the oil and gas in the Caspian Basin which Condi Rice was our expert on. Apart from nuclear options, from upending and throwing the board to the ground, this is checkmate. Russia wins, and Iran falls into its economic orbit.

I'm not sure "thankful" is quite the right word, and "relieved" isn't either, but it's nice to know some world leader might know what they're doing, even if they're not on our side. Watchers like me have seen the buried coals and embers of the Cold War stirred, unsooted, and doused by smelly Match-Light.The fires are burning, the energy wars have proliferated, but this isn't a conflict worth contesting, and I pray the doctors heavily sedate Dick Cheney. 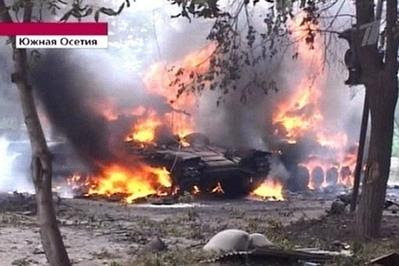 Who gives a shit about GWDisaster ..moving on.

When Bush heard that Russia was attacking Georgia, he rushed U.S. Army troops to Atlanta....

Sun Tzu would have been been impressed by the sucker punch during the Olympics (peace on earth, goodwill to all nations). Chimpy got to sit there in the Birds' Nest for all the world to see, right next to his billionaire enemy, without a clue of what was going on. I suppose he is going to blame the CIA.

Wish it were that simple. Dominoes are kipping over, and at minimum conventional wars will spread in the region. Look to the Ukraine next, Kurdistan inside Iraq, and even Israel buddying up to the Bear.

LOL, that can be repeated on the Daily Show. (or this blog).

Yep, and he thinks Sun Tzu is a Chinese chef who owns a string of restaurants, nice guy. The agency tried to tell him about Putin in their briefings, and his response was, "I've looked into his soul."