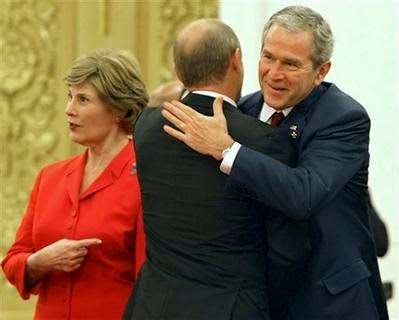 US Calls NATO To Back Georgia
Mental note: I don't think the Bush Administration will escalate Project Georgia into WW3, 4, etc by directly attacking Russia. They don't attack countries which can effectively fight back, preferring in such cases to rely on hapless proxies to spend their fates. Rather, incompetence and bluster are the vehicles putting forces in harm's way and destabilizing a low-intensity conflict into more torrid diplomatic temperatures. That has already happened, as US and Israeli arms, munitions, and trainer-advisors were on the ground with Georgian forces during the conflict. It seems likely they took some casualties we're not hearing about.

Exhibit Z: the picture above is of a medicated sociopath drawing a world leader into an involuntary hug last Friday, while said leader's armies were kicking Proxy Ass. It's like something out of the Godfather II, only Fredo is developmentally disabled, was mistakenly tapped by Vito Corleone to run the family, imagines himself to be Genghis Khan, and likes guys. Seriously, looking at that picture makes me afraid, not to mention ashamed, for my country and the world. Putin appears to be grabbing for something, and Sister Laura is making the "It's Happening Again" signal, so the Humping Intervention Team jumped in before the nasties went down.

Calling an emergency NATO meeting now (just after consummating a mutual security treaty with Poland in exchange for "missile shield" deployment, aimed against kielbasa-coveting Iran) is a clueless attempt to draw Europe into the conflict. NATO will probably waver, possibly even splinter, in the face of that demand; given the energy supply consequences for them, it's a tough sell. If they conduct a fool's parade onto the borders of disputed states to save face, as the US compels them to do, it greatly increases Russian ire and the likelihood of accidents. Maybe they could just vote to bestow non-binding "honorary memberships" on Georgia and the Ukraine:

BRUSSELS (Reuters) - NATO ministers will pledge support for Georgia and reiterate a promise of future membership on Tuesday while criticising Russian intervention in the country and urging Moscow to respect a peace deal, a spokeswoman said.

Washington called an emergency meeting of the 26 NATO foreign ministers to review ties with Moscow and discuss help to Georgia, a former part of the Soviet Union which won its pledge of eventual alliance membership at an April summit in Bucharest.

Months of tension between Georgia and Russia erupted on August 7, when Tbilisi launched an assault to regain control of the Russian-backed breakaway South Ossetia region. Russia launched a massive counter-offensive including into the Georgian heartland.

U.S. envoy to NATO Kurt Volker told Reuters on Saturday no specific response had yet been decided, but regular meetings of foreign and defence ministers, and of NATO ambassadors with their Russian counterpart would be part of the review.

Also under scrutiny would be dialogue in counter-terrorism, counter narcotics and missile defence, he said.

A NATO spokeswoman played down reports of divisions among NATO allies on the response to Russia, saying ministers would deliver "a very clear message of solidarity to Georgia".

"We will reaffirm the commitment in Bucharest and the meeting is also expected to approve a package of measures to support Georgia," Carmen Romero said.

NATO states were expected to agree to send experts to assess damage to Georgia's military infrastructure, including radar installations damaged by Russian action, she said.

Romero said there was expected to be a "strong message" to Russia calling for implementation of a ceasefire, its commitment to withdraw troops and an international peace mechanism.

"I think the allies are going to be firm that this was a violation of Georgia's territorial integrity," she said.

US SAYS NOT SEEKING CONFRONTATION

U.S. Secretary of State Condoleezza Rice has warned that Moscow's actions had set back its efforts to integrate into the global community and vowed the United States would rebuild Georgia.

A six-point peace plan foresees a prompt withdrawal of Russian forces from 'core Georgia' -- areas outside South Ossetia and a second Russian-backed separatist province of Abkhazia -- but the West will also be looking for Russian troops to cut back their numbers quickly in South Ossetia itself.

It also wants international observers on the ground quickly to monitor the pullout but no arrangements have yet been made.

NATO has already barred a Russian ship from joining a multinational anti-terrorism exercise in the Mediterranean, and Russia is still waiting on its request for an emergency meeting with alliance ambassadors to discuss the crisis in the Caucasus.

Washington has excluded Moscow from discussions among the Group of Eight industrial nations over Georgia and Rice and President George W. Bush have made clear Moscow's membership of bodies like the World Trade Organisation could be in jeopardy.

However analysts say isolating Moscow does not seem to be a viable option for Bush as Russia is just too important. If ties were to deteriorate to Cold War level, a lot is at stake, from U.N. cooperation on curbing Iran and North Korea's nuclear ambitions to U.S. access to Asia and Afghanistan.

Russia is also a key energy supplier that some big European NATO members like France and Germany are loath to antagonise.

Umm,Naj, yes, I hope so. But what did you Canadians do with our Humping Intervention Team?

noffin' ... we watch in a perfectly Canadian silence!

am not an "insider" by way shape or form, but am guessing that the Aussie contingent is already overstretched, and would not be interested in yet another Northern hemisphere stoush.

.. on the other hand, who knows where we draw our "token" troops from .. heh.

Australia would be a great place to be for the next 6 months while the Deciders play grab-ass with nuclear conflict in an election year...