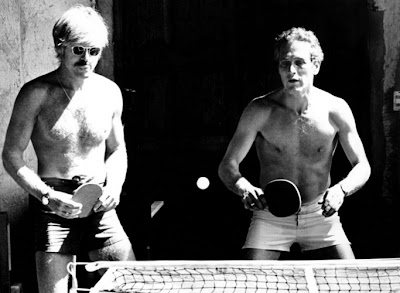 Butch And Sundance: Reel Heroes, And Real
News came out last month that Paul Newman has lung cancer, and probably has only weeks to live. Famous for his film acting, such as his smash hit with Robert Redford, "Butch Cassidy and the Sundance Kid," most people don't know he was just as successful in car racing over the past three decades--in 1979 he came in second at the 24 Hours of Le Mans, and incredibly, he more recently placed third in an SCCA Trans-Am race at the age of 78. Yet it's his work as a philanthropist which is likely to endure--all profits from Newman's Own food products go to charities, most of them anonymous, so far generating over $220 million, and his family will continue taking that forward.

Newman and writer A.E. Hotchner founded Newman's Own in 1982 as a hare-brained scheme, selling olive oil and vinegar dressing. In 1988, they started the Hole in the Wall Gang summer camps for terminally ill children. In 1993, they started the PEN/Newman's Own First Amendment Award, for courage in the face of adversity to defend freedom of speech; amongst other winners was Sibel Edmonds, the FBI employee who tried to bring government-sponsored sale of nuclear secrets to light. He was no slouch when it came to personally facing up to bad guys, having once been #19 on Nixon's Enemies List for his effective support of Eugene McCarthy in the 1968 Presidential Campaign.

As a person, Newman always played it very close to the vest, and he's not the type to explain things. It's hard to figure out his motivations in any detail. As an actor, however, they're all written out on his face: a stubborn, competitive-as-hell guy with a quirky sense of humor who believes in giving people a fair shake.

One could speculate further. Newman was a World War Two veteran, serving as a torpedo bomber's tailgunner on the USS Bunker Hill. He was at the battle for Okinawa, and the pilot of his plane had an ear infection, so he didn't take part in an attack from which none of his flight-mates returned. He would not be the first veteran who, thankful for his good fortune, vowed to give back to people. Whatever drove him, Newman appreciated life, took its full measure, and did a tremendous amount of good on the way. May his pains be brief.
Posted by MarcLord at 12:23 PM