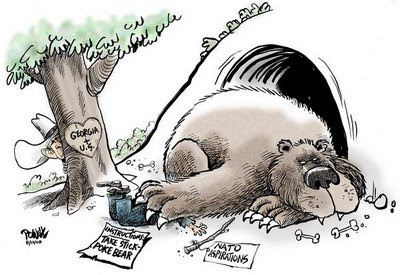 Condi "War Is Not The Answer" Rice

"Russia is a state that is unfortunately using the one tool that it has always used whenever it wishes to deliver a message and that's its military power. That's not the way to deal in the 21st century."

Violence is, like, so 20th century! Presidential candidate John McCain, with the sagacity of the Prophet Isaiah, may have inspired this meme a few days ago when he observed, "Countries don't invade other countries in the 21st century." By ushering in the Golden Age of Peace to which Condi and John allude, a.k.a. Pax Dubyana, the Bush Administration has steadfastly refrained from resorting to military power, except of course when the United States is directly attacked, such as by Afghanistan, Iraq, Somalia, Lebanon, Iran, Syria, parts of the Phillipines, Indonesia, much of West Africa, and those Costa Ricans who don't want Hilton beach resorts.

Any nation or group refusing to accept the Golden Age of Peace wishes to stay in the Dark Ages and is lending support to the Axis of Exil. We will therefore send our armies of foreign primordial dwarves led by Columbia Law School graduates to destroy you. (And why was Russia left out of the original Axis of Evil, anyway? What expendable minion is responsible for this inexcusable oversight?) For example, here is the kind of violent psychopath Condi has to deal with:

"Russia has long been told to simply accept the facts. Here's the independence of Kosovo for you. Here's the abrogation of the Antiballistic Missile Treaty, and the American decision to place missile defenses in neighboring countries. Here's the unending expansion of NATO. All of these moves have been set against the backdrop of sweet talk about partnership. Why would anyone put up with such a charade?"

This aggression will not stand, man! Here is yet another example of unwarranted bellicosity from Russia's version of the Washington Post (state newspaper "Pravda"):

Why don’t you shut up? In your statement on Monday regarding the legitimate actions of the Russian Federation in Georgia, you failed to mention the war crimes perpetrated by Georgian military forces, which American advisors support, against Russian and Ossetian civilians.

Why don’t you shut up? Your faithful ally, Mikhail Saakashvili, was announcing a ceasefire deal while his troops, with your advisors, were massing on Ossetia’s border, which they crossed under cover of night and destroyed Tskhinvali, targeting civilian structures just like your forces did in Iraq.

Why don’t you shut up? Your American transport aircraft gave a ride home to thousands of Georgian soldiers from Iraq directly into the combat zone.

Why don’t you shut up? Do you really think anyone gives any importance whatsoever to your words after 8 years of your criminal and murderous regime and policies? Do you really believe you have any moral ground whatsoever and do you really imagine there is a single human being anywhere on this planet who does not stick up his middle finger every time you appear on a TV screen?

Do you really believe you have the right to give any opinion or advice after Abu Ghraib? After Guantanamo? After the massacre of hundreds of thousands of Iraqi citizens? After the torture by CIA operatives?

Do you really believe you have any right to make a statement on any point of international law after your trumped-up charges against Iraq and the subsequent criminal invasion?

Why don’t you shut up? Suppose Russia for instance declares that Georgia has weapons of mass destruction? And that Russia knows where these WMD are, namely in Tblisi and Poti and north, south, east and west of there? And that it must be true because there is “magnificent foreign intelligence” such as satellite photos of milk powder factories and baby cereals producing chemical weapons and which are currently being “driven around the country in vehicles”? Suppose Russia declares for instance that “Saakashvili stiffed the world” and it is “time for regime change”?

Today, Condi glued the Golden Age of Peace into the pages of history today by signing a mutual security treaty with Poland. A little nervous after having seen what happened to Georgia, or as we call it, "Rosebud," the Poles demanded written guarantees they will be defended against any massively paranoid evil-doing country which happens to maul them to death over the vigorous protests of an impotent NATO for installing US missile arrays 100 miles away.

I'm sure Russian officials were just making a little joke when they talked about nuking Poland, and will come to see the Wisdom of Dubya--especially after we send them more McDonald's franchises. Hello, Mr. Kremlin General, war is not the answer, so put down that vodka bottle and enjoy a delicious Happy Meal! And while we're at it, have a brand-new Chrysler!

(Research credits to Bruce, Brother Tim, MikeVotes, and to The Daily Show, which will surely plagiarize this post in an upcoming episode.)

What kind of a PhD on Russia does this woman have?

Her thesis was "Uncertain Allegiance: The Soviet Union and the Czechoslovak Army, 1948-1963." Not heady stuff by any standard, and her choice of subject was helped by the sponsorhip of her first poli sci professor, who happened to be Madeline Albright's father.

She concludes the thesis so:

"Examination of the impact of power asymmetries on the development of the nature of domestic institutions may ultimately help us to understand the concepts of power and influence themselves.

As you can see, she had an early gift for elusive language and gobbledygook. Her thesis was criticized in scholarly reviews for over-reliance on secondary sources, not sifting facts from propaganda, not validating information, and not knowing much about Czechoslovakia.

She has routinely made glaring errors in public statements regarding world history which betray a shallow knowledge of it. I don't know much of her rise through academia, but she bears the marks of a Tenure Whore.

Oh, that explains her qualifications for the Buchko!

At least they're predictable.