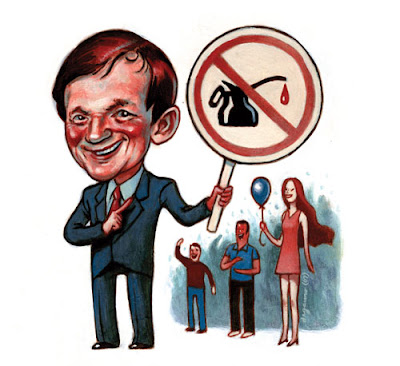 We've Already Tried A Retarded President...Why Not A Vegan?
The word "jeremiad" used to be employed off-handedly conversations, back when more people were subjected to the morality-building rigors of seminaries and Sunday schools. The word was coined for the prophet Jeremiah (lit. "god throws"), who was reviled by the people of Jerusalem for loudly calling them to righteousness. He explained Babylon's hold over them could be thrown off but for their iniquities, and Jeremiah would commonly walk in public wearing a wooden oxen yoke over his neck. He advised his king, Zedekiah, not to plot against Babylon, rather to focus on strengthening his own people. The advice was rejected.

Jeremiah was quite the killjoy, writing a book about how badly the Jews were screwing up, followed up by the Book of Lamentations. Finally in 591 BC, a short-changed Nebuchadnezzar besieged Jerusalem for three years. King Zedekiah was forced to watch all his sons murdered just before his eyes were put out. Jerusalem was sacked and burned, the ark of the covenant was lost, the residents carried off into captivity for 70 years. When the Jews went to Egypt, they insisted on taking Jeremiah with them, having become accustomed to his rants, and to him being right.

We have our own Jeremiah here. I didn't realize Kucinich is a vegan, until 'Because he was right' was published by The Stranger. Dennis Kucinich's jeremiad are things of beauty, really, and I'd even been thinking of sending him some money. Maybe he can bribe a news agency to let him into a debate someday, rather than getting excluded. Money is probably a bit late for this cycle, but Kucinich pretty much sealed the deal for me by calling Bush a liar on the floor of Congress today, and announcing he would file articles of impeachment on Bush next Monday. (See article at: Rep. Kucinich creates commotion in House, claims President 'lied')

The article at The Stranger is a hoot, and worth a read. A snippet:

This is a candidate who announces, on national television, that he would refuse to shoot a Hellfire missile at Osama bin Laden if given the opportunity; a guy who prattles on about the interconnectedness of humanity and his plans for creating a cabinet-level Department of Peace; a man who brags about the wonderfully low blood pressure his animal-cruelty-free diet has brought him (memo to the Kucinich campaign: Americans like their leaders carnivorous and on the verge of cardiac arrest, thank you very much—see, for example, our last two presidents: Bill Clinton and Dick Cheney).

It tells the story of a rather remarkable man, one from a region (Cleveland) that's being gutted and carried off into the modern version of captivity, yet who gives us both a lesson and a reason for hope. Read more.
Posted by MarcLord at 2:55 PM

And I love the fact that he's choosing the date of Bush's State of the Union Address to file it. How apropos......

Even across the blogosphere he is ignored. Truly amazing. I saw him speak during the 2004 campaign and new then that he is way ahead of his time, yet still is able to survive and do good work as a politician. I find that genuinely remarkable and admirable.

Good piece in The Stranger, but the writer is a bit hung up on the "because i was right about Iraq" angle. Dennis isn't arrogant about that, and he knows, unlike most, that there was no majority in favor of the Iraq war. The media portrayed it that way, however. Whatever support there was, was through an intense campaign to frighten the gullible. My paper, the AJC, no progressive rag, ran a full page of letters on the question of for or against invasion, selecting the number of representatives for each position according to the percentage received overall. It was about 70-30 against. Polls are typically rigged and otherwise slanted. My gut says it was 50-50 at best on the Iraq question. Kucinich wants to remind people that he was right to remind them that they were lied to by the people seeking their votes,who knew as well as those letter writers that the war was a lie and a mistake but was politically expedient. Kucinish is all about raising awareness

Agreed, Bruce, his election isn't the point, running represents far more than just being right about Iraq. But it's pretty damn significant that he voted against it (I live in the only other district that did, Jim McDermott's). He's a political animal that is capable of sailing into the wind, and the article should've dwelt more upon that.

Kucinich represents a possible future for America, as the article does touch on, even if it weirds the authors (who are sex-help columnists) out a little.

I should've mentioned that in the post rather than make certain diligent people drill through to the article. ;-)

Also, the "saying something so I can take it off the record" maneuver is congressional triviana, something I'm not too familiar with. One should be able to state a self-evident fact or two as an elected official, one would think.