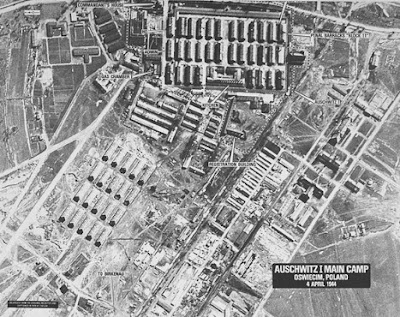 Bush World Tour: Bombing Auschwitz
Now that doctors aren't using it anymore, "First do no harm" should really be a motto for heads of state, even elected ones. POTUS 43's visit to any furren country is always an occasion for hi-jinks which can run the gamut from amusing gaffe on to casual sexual harassment, then straight to casus belli. His recent visit to Israel left a rich vein for historians to mine, along with a bunch of very unimpressed Palestinians rolling their eyes and pantomiming self-abusive gestures.

I mentioned in a previous post that Bush was moved to say at the Israeli Holocaust Memorial, "We should have bombed Auschwitz." In this case he meant as a way to save lives, not to kill more condemned people, but this statement can cause some confusion given his enthusiasm for capital punishment, and a grandfather who funded the first eugenics center in the US (at Yale, 193x.) As a holographic trademark of all that is Bush, this one's hard to top. It's gangrene burlesque, and distills a whole lot of misguided, drunken, pathetic, fumbling, insane, violent ignorance down into just five words. We should have bombed Auschwitz. It's a nearly perfect representation, not just of Himself, but of the entire murderous Bush family.

Let's just say that his revanchist wish had been granted. Heck, throw in Sobibor. Bergen-Belsen. Dachau. Treblinka. Throw in the other 190 camps, too. True, I admit, concentration camp inmates would have had the privilege of dying cheerfully from the explosions and concussions of Freedom Bombs, knowing they were sent down by the good guys. But what else would have happened? Would the German guards have put up with it? "How dare zose Amis," they would have said in the ensuing movies, "zey haff no right to kill our prissoners. Vee vill show zem. Line ze Yuden uppen and shooten zem at once!!" Extreme? Unlikely? The reaction would've been right in line with the deadly farce and legal dada-isms of what Germans still refer to as "die Kah-tzet," the German proununciation of the letters KZ, short for "concentration place."

It is a matter of record that Jewish authorities asked the War Department to bomb the rail lines leading to Auschwitz, that the request was rejected, and that there has been a raging debate over the "whether or nots" ever since. George McGovern, once a bomber pilot based in Foggia, Italy, later said we should have bombed the gas chambers at Auschwitz to slow the killing. Holocaust docents consistently condemn Roosevelt for not bombing Auschwitz. To these good people and kind sentiments, I have a few respectful observations:

1) while I agree it would have been good symbology, how exactly would bombing the rail lines or the gas chambers have helped? Lives would not necessarily have been saved or prolonged.

2) the Auschwitz Protocols on which many assumptions are now based, were written by two escapees in 1944 who quoted rumors as fact, as is apparent from the report itself and from later contradicting statements. While the rumors may have been true, military operations, some history notwithstanding, are usually not launched on hearsay.

3) President Roosevelt, the Pope, and others did effectively intervene, diplomatically prevailing upon Admiral Horthy to stop the deportation of Hungarian Jews on July 9th, 1944. These parties used the Auschwitz Protocols to convince Horthy and his prime minister in their decision. Those who were saved surely appreciated these efforts more than bombs.

4) a serious investigation into the gas chambers leaves their existence, location, and extent of operation in doubt. While this doesn't absolve the Nazis of their super-abundant war crimes whatsoever, it shows they did not require gas chambers to kill millions of victims, a fact which calls bombing as a solution further into question.

The US should have done much more, much earlier to save European Jews from the Nazi regime. The book 'The Abandonment of the Jews' explains why it didn't happen, how they were turned away. By the time the question came to bombing concentration camps, it was far too late, and I suspect had they been bombed, the same voices might now be condemning the brutality and idiocy of the perpetrators. It simply wasn't practical at the time, and had it been attempted, the unintended consequences would likely have far outweighed the benefits. Even the statement "bomb Auschwitz" is, philosophically, an oxymoron.

In BushWorld, however, in the special place, all bombs hit their desired targets. Bombing concentration camps would not cut wires nor destroy fences, bombs would not scare people into running away to find cover, which would not result in temporary break-outs, which in turn would not mean a massive security risk, so all the inmates would not have to be shot upon contact. In BushWorld, the German high command would not be effervescing that the Allies were willing to take time out of their busy schedule of strategic bombing to go after propaganda targets. They would have been greatly distressed that we were saving their worker-Jews by bombing them, and they might have even sued for peace. The world would've stood in awe, the Russkies storming westward ho would've said, "Aww, the hell with it. Let's go home," and Eastern Europe wouldn't have gone commie. Because we can control everything with bombs. Like magic. Just the right amount of bombing will always do the trick.
Posted by MarcLord at 11:00 AM

Does this new "Bush doctrine" mean that Castro is now justified in bombing Guantanamo?

I dunno. Do they have gas chambers?

Nothing that humane, Marc.

yeah, I suppose Zyklon-B would be too quick for our enemies.