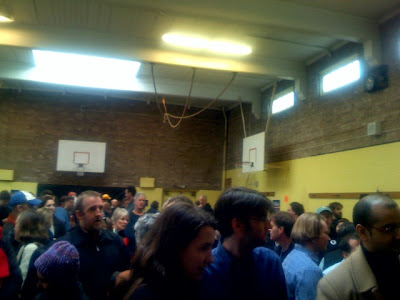 Washington State Caucus: My First Politics
Just back from the Washington state caucus. The key swing issue there was electability–the Clintons enrage and mobilize the conservatives, giving McCain a chance in red states, and in states where he shouldn’t have one at all. Even the most eloquent and/or impassioned advocates (points were experience, Bill backs her up, health care, pro-choice, experience) couldn’t defend that point. About 3/4s of the undecideds in my caucus went to Obama, and 75% of caucus-goers in the most democratic, highest-turnout district in all of Washington state voted for him.

The debate was quite high-quality went from positive to invigorating and then it started to devolve into Not Pretty. The Obama campaign had sent out emails this morning urging everybody to dwell on the positives, and to not attack. At precisely twenty minutes into debate, the Clinton supporters started becoming more vocal, then comparatively acrimonious, hogging the chair, finally going negative, and at the end at least 5 of them (females) shot my loved one extended dirty looks while she was speaking, and after. Then the Undecideds got to confer, ask questions for 10 minutes, and choose a candidate. All but one did.

Of course, due to local circumstances, our anecdotes and results may not indicate much nationally due to the last race for Governor here. A Pug candidate with no political experience (Dino Rossi) came within about 40 votes in a bitterly re-counted election of taking the governorship on little more than a commercial of holding up a baby, smiling like a state patrol officer, and saying he was strong on family values. A few votes in Seattle were the only reason our governor (Christine Gregoire, Obama endorser) is a Democrat. She's a fine governor, but many feel a much stronger candidate should've been allowed to run, and there seems to be little remaining trust in the Democratic party in a state that went 70% for Gore in 2000. A taste for new ways of doing things is in the air here, and today's turnout was brim-full-to-overflowing.

Easily the most popular caucus attendee was an older man squarely in the Clinton demographic group who stood up and said, “Our generation brought in the most divisive politics in the 20th century. Hillary Clinton only brings more divisiveness, and our time has passed. The currency of the 21st century will be diversity, and no one has more appreciation of diversity, from where and how he grew up and what he's done thus far, than Barack Obama.”

Lord Wife bravely volunteered to take notes, brave because the high school gymnasiums and classrooms were all mobbed and quite noisy, but she did a professional job. She was then encouraged to run as a delegate by a couple 23-year old supporters who liked what she had to say.

I suspect they may have also been supporting the MILF ticket, but as the debate was drawing to a close, my better half made a very effective rebuttal to a claim that Clinton's public health plan is superior to Obama's. Shorter Lord Wife: "I work in public health research, so I've compared the two plans very carefully. The Clinton health care plan is mandated, mandated plans in California and Massachusetts have already failed, and it further sucks on vectors x, y, and z." She was subsequently elected to be a delegate to the state convention, as was the aging boomer, an 18-year old of Pakistani descent, a young executive of Indian descent, and a woman who works with special needs kids. My wife was tickled pink. (And she wants to write a post comparing health care plans soon.)

The Clinton supporters were barely able to eke out 2 delegates out of seven. I wondered how they did it, given the shrinking numbers of undecideds. Then I realized they had persuaded one last person to stay undecided, so that the Clinton delegate share went up mathematically from 1.488 to 1.5, thus allowing it to be rounded up to 2. Otherwise it would've been 6-1.

Overall it was quite an experience to caucus, that is, to participate in politics for the very first time. We live in one of the most impregnable of Democratic strongholds, probably one of the most Democratic neighborhoods in the country. Our House rep is that lightning rod of conservatives Jim McDermott, our state rep is a single-issue candidate (gay marriage), and everybody seems to be driving bio-diesels, Priuses, Honda Fits, scooters, and bikes. We're safe territory that wasn't even supposed to have mattered in the primary, and the Clinton campaign didn't even have an office here until this week. I'm not sure how far away this can be extrapolated, but we went in a landslide for Obama.
Posted by MarcLord at 5:18 PM

We are in desperate need of change, Marc. Thanks to all in Washington State for helping to promote it. The death of 'business as usual' will be an ugly thing to witness, but is a necessity. Congrats also to the Lord Wife. May wisdom guide her.

It's obvious to us, Brother Tim. You said it true, and the hardest thing in the world is to let go of what you know. Lord Wife will be an excellent advocate, one whose knowledge is both in her brain and bones.

The death of business as usual will not go quietly, that's for sure. I saw the genuine anger, waiting hot, plugged up and righteous for its due at the caucus. Those people were pissed.

Ob had a great response to teh 60 mins last night:

"google is a young company too, but it can perform!"

The age of wisdom is really past us. Not that Hilly is "wise", she is clever I grant.

I don't think this is the end of business. This is just the beginning of a new business.

Bringing up google's analogy was an interesting one. I think with Obama, we are entering teh politics of "anti-big-blue-brother"

What took technology by storm, and then became the rebellious apple, has folded onto itself now! Obama is the Apple of political realm!

Anyways, I am watching with fascination!

Your state is great MArc because you are so close to beautiful BC and its magnificent population of weed-headeds ;)

Thanks for passing that on, Naj. Google is a great thing for him to have brought up, and search engines, the internet's ability to open up politics, are transforming politics. Obama is an Apple...and I'll use your analogy (with all credit due, of course).

We love BC, and even seriously considered going on vacation there again, even if we won't benefit from its #1 cash crop. ;-)

Hey you promised to come down east this time! We've got lovely snow to treat you with!

I love snow! Especially when it's on a mountain peak in Hawaii. ;-)