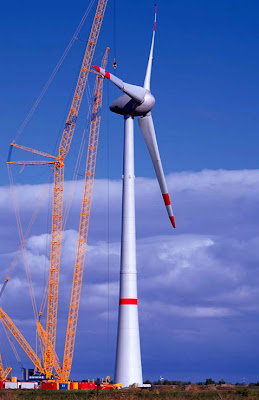 The windmill is officially rated at 6 megawatts, but will most likely produce 7+ megawatts, or roughly 20 million kilowatt hours per year. That’s enough to power about 5,000 households of four in . In the , the calculation would be 938 kwh per home per month, multiplied by 12 months, or 11,256 kwh per year per house. Good for a very patriotic 1,776 American homes on one wind turbine. The turbine is being erected in Emden, Germany by Enercon.

A few days ago a friend and I were discussing how to improve another record, the world's longest floating bridge, which extends across Lake Washington. The pontoon portion of the bridge (which has capsized and sunk twice, and closed for extended times) has an inconvenient tendency to buckle northwards as water piles up on its southern-facing side due to a strongly prevailing wind direction. You can often see whitecaps on its southern side, while just across the four lane of the bridge, the waters are as smooth as glass. Breakers will splash across the lanes, and the bridge usually must be closed during periods of high winds.

We thought, "Why not turn the 520 floating point bridge into a wind generation platform?" Each wind turbine platform, probably up to ten of them, could be linked with a short bridge section, the route could be stabilized and generate electricity for up to 20,000 homes. It would be a worthy place to spend my state's tax dollars, improve a route that is the bane of many a commuter's existence, and might even be enough to make the Germans envious.

Or put the turbines on a highway:
http://www.inhabitat.com/2007/04/30/student-designs-highway-power/

Ya sure, you betcha. It's not like the NIMBYs can argue about the aesthetics of overpasses being defaced. I suppose they always could, but derision would ensue here, there, and everywhere.

from this I deduce that American homes are thought to consume nearly 3 times more electricity than European ones. I wonder why. Air conditioning? Larger fridges? Dishwashers (they are quite common here)? electric heating (also quite common here)? Lighting the yard and Christmas lights on the housetop? Or being less niggardly?

I think it has to do with two things, first a preference for more lumens, and second for being dumb gits and not turning off lights.

Sorry, my electric Santa doll is clapping and yelling "HO HO HO" too loudly for me to concentrate. You wonder about the what now?