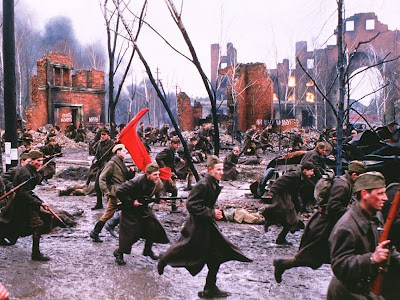 Have We Met The Enemy, Pt. XIX: Wal-Mart
From Mother Jones:
Not sure if the story is apocryphal or not, or what the suit's outcome was. Will check further before my HQ is overrun and I'm forced to call artillery down onto my own position. (Research credit to Lord Wife.)

Update: the above story is legit, Wal-Mart won its suit, and the practice of health care cost "recovery" by corporations is becoming common policy, written into the fine print of health care plans. From the Wall Street Journal health blog:

A collision with a truck left Deborah Shank brain-damaged and in a wheelchair. A settlement awarded her $700,000 but what’s left of that money — after legal fees — is slated to go to Wal-Mart Stores Inc., her former employer, WSJ’s Vanessa Fuhrmans reports in a Page One story.

Wal-Mart’s health plan covered Shank’s medical costs, which were more than $460,000. Later Wal-Mart won a lawsuit against Shank seeking $469,215 in medical costs, legal fees and interest for the cost of suing.

The move by Wal-Mart is one that’s becoming increasingly popular by employers, insurers and union-administered who are struggling to deal with rising health costs. A provision, commonly found in health plans, allows the employer to recoup settlement money that it paid out in medical costs.

The argument that Wal-Mart and others makes is that Shank shouldn’t be paid for the same medical care twice. (In a similar dispute, a Supreme Court ruling sided with a health plan.) However, Shank’s lawyer argues that she could use the settlement money for future care and she wasn’t fully compensated for her injuries, a common claim in large settlements.

Companies are even starting to go after smaller claims.

A cottage industry of auditing firms helps recoup payments and they estimate that between 1% and 3% of health-care spending is potentially recoverable. Hospital-chain HCA says it has seen recouped claims rise to $1.8 million in 2006 from just under $800,000 in 2000 after hiring one such firm, Benefit Recovery Inc.

“In the past, employers used to think of this as an afterthought,” says Tom Lawrence, Benefit Recovery. But now they’re apparently banking on it as a revenue stream.