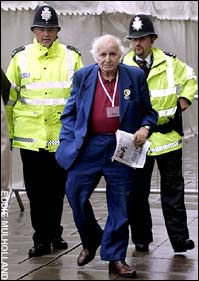 Fortress Britain: Party Member Hauled Away, Held As Terrorist
England is the Blarney Stone of traditional Western freedoms. Magna Carta was made while commoners and royalty sat by the ancient sacred tree at Runnymede to invent habeas corpus, and courts which ran on rule of law. Much future intellectual and economic prosperity were granted solid foundations that day, so it is discomfiting to watch as England begins descending a steeper stairway into paranoia.

As the Labour Party held its conference in Brighton, Foreign Secretary Jack Straw said Britain was in Iraq for one reason only--to help the Iraqi government. At which point 82-year old Walt Wolfgang yelled, "That's a lie and you know it!" He was descended upon by security guards, and party members say they handled the old gentleman rather roughly while ejecting him from the proceedings.

Mr. Wolfgang is a Vice President of the Campaign for Nuclear Disarmament. As he was being wrestled out, party chairman for Thamesmead Steve Forrest said, "Leave him alone, he's an old man." Forrest was immediately hauled away by more guards. Wolfgang, a refugee from Nazi Germany and Labour Party member since 1948, has no dearth of perspective:

"When you have an international debate that does not deal adequately with the international issues of the day, the least you can do, if someone is talking nonsense, is say so."

At first Sussex police denied that Mr Wolfgang had been detained or searched but a spokesman later admitted that he had been issued with a section 44 stop and search form under the Terrorism Act.

Mr Wolfgang said: "We have reached a situation where freedom of expression has been threatened. I am not surprised, because the Labour Party has been taken over by a gang of adventurers who are on their way out."

On their way out. Yes, rather...well, let's hope you live to see that day, sir. Until then I'm making a new tag entitled 'Fortress Britain.'