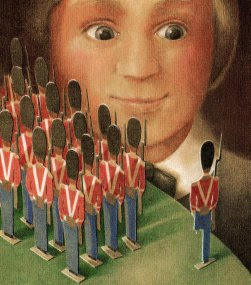 Tin Soldiers
Below is an excerpt from one of the recent WaPo pieces about Walter Reed Hospital. SecDef Gates is on the warpath over the coverage, and his wrath will roll downhill. But nothing much is going to change there, because Walter Reed is on the BRAC (Base Realignment and Closure) list. Its commanding officer, whose name I will not give the satisfaction of printing here, should be immediately fired, dragged in front of Congress, and be exposed to court-martial. Here's the excerpt:

Deep into deer-hunting country and fields of withered corn, past the Pennsylvania Turnpike in the rural town of Ellwood City, Steve Justi sits in his parents' living room, fighting off the afternoon's lethargy.

A photo on a shelf shows a chiseled soldier, but the one in the chair is 35 pounds heavier. Antipsychotic drugs give him tremors and cloud his mind. Still, he is deliberate and thoughtful as he explains his path from soldier to psychiatric patient in the war on terrorism.

After receiving a history degree from Mercyhurst College, Steve was motivated by the attacks of Sept. 11, 2001, to join the National Guard. He landed in Iraq in 2003 with the First Battalion, 107th Field Artillery, helping the Marines in Fallujah.

"It was just the normal stuff," Steve says, describing the violence he witnessed in Iraq. His voice is oddly flat as he recalls the day his friend died in a Humvee accident. The friend was driving with another soldier when they flipped off the road into a swamp. They were trapped upside down and submerged. Steve helped pull them out and gave CPR, but it was too late. The swamp water kept pushing back into his own mouth. He rode in the helicopter with the wet bodies.

After he finished his tour, everything was fine back home in Pennsylvania for about 10 months, and then a strange bout of insomnia started. After four days without sleep, he burst into full-out mania and was hospitalized in restraints.

Did anything trigger the insomnia? "Not really," Steve says calmly, sitting in his chair.

His mother overhears this from the kitchen and comes into the living room. "His sergeant had called saying that the unit was looking for volunteers to go back to Iraq," Cindy Justi says. "This is what triggered his snap."

Steve woke up in the psychiatric unit at Walter Reed and spent the next six months going back and forth between there and a room at Mologne House. He was diagnosed with bipolar disorder. He denied to doctors that he was suffering from PTSD, yet he called home once from Ward 54 and shouted into the phone, "Mom, can't you hear all the shooting in the background?"

He was on the ward for the sixth time when he was notified that he was being discharged from the Army, with only a few days to clear out and a disability rating of zero percent.

On some level, Steve expected the zero rating. During his senior year of college, he suffered a nervous breakdown and for several months was treated with antidepressants. He disclosed this to the National Guard recruiter, who said it was a nonissue. It became an issue when he told doctors at Walter Reed. The Army decided that his condition was not aggravated by his time in Iraq. The only help he would get would come from Veterans Affairs.

"We have no idea if what he endured over there had a worsening effect on him," says his mother.

His father gets home from the office. Ron Justi sits on the couch across from his son. "He was okay to sacrifice his body, but now that it's time he needs some help, they are not here," Ron says.