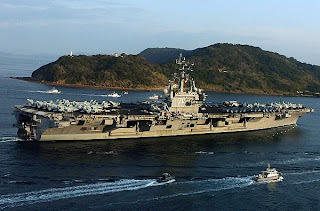 CORRECTION: FOUR Carrier Battle Groups Around Persian Gulf (Not Five)
(Update: Good news. I'm wrong. Something major has changed. I saw three separately sourced stories placing the USS Reagan in the Persian Gulf, two with Rear Admiral Michael Miller quoted on February 21st describing the ship as actively supporting operations in Iraq, one with two destroyers rushed from Pearl Harbor to accompany the Reagan to the Gulf on short-notice "surge deployment" but it's all changed. The Reagan is now in port in Sasebo, Japan, on a "friendship building and goodwill-generating" mission. Something major has shifted, and I would suspect it has to do with Iran and Syria attending a summit in Iraq which will be attended by representatives from the United States and United Kingdom. They're going to negotiate. Please adjust the comments below accordingly, my apologies for not digging deeper and earlier. =))

I am now 90% certain the US will attack Iran during or before April. A 5% chance exists it won't happen because generals on the Joint Chiefs of Staff have threatened to resign if the attack is made. Maybe they're prepared to do more than just resign. And a 5% chance it won't happen exists simply because I want to be wrong.

The majority of analysts believe the forces off Iran are for mere saber-rattling; that majority is utterly, miserably wrong. The ships weren't parked there for purposes of negotiation. They are there because the policy of regional transformation followed by the Bush Administration and Israel, as expressed by its attack and occupation of Afghanistan and Iraq and many other aggressive steps, has always planned a take-over of Iran. Iran, in fact, is the whole point. Capturing Iran's hydrocarbons has long been seen by the Project for a New American Century as a way to manage the economic growth of China and India.

Some people have been searching through to this site recently via googling on the USS Nimitz and the Persian Gulf, so I wondered if it was heading there. Since it returned to base in Florida last September, that doesn't seem likely, but I've been unable to locate it yet. I tracked the source of these new hits back to an article in The New Statesman, "Iran-Ready to Attack," which claims the Nimitz is at sea. The article does not do a good job carrier-counting, so I went back and checked on the USS Reagan's status for Gulf duties, which I previously reported here as assigned to the Gulf (despite the official story it was headed to Japan) when it left Coronado Island. The World Tribune confirms the Reagan is patrolling near the Gulf. In addition to the Stennis and the Eisenhower, that makes three heavy aircraft carriers in the region. But there are more.

Two expeditionary strike groups (or ESGs, which means marines with amphibious landing gear), centered on the marine assault carriers USS Boxer and the USS Bataan (short-range jump jets and helos) which are attached to the Fifth Fleet and are off Iran. The Bataan went through the Suez Canal and into the Red Sea on January 30th. Two ESGs there probably aren't enough, so there are probably more enroute. Technically, that totals five carriers. I would expect 2-4 more expeditionary strike groups, probably rotated in from Japan after North Korea's buy-off, to arrive near in the Red Sea or Persian Gulf before all hell breaks loose. They're preparing not to just bomb Iran. They're actually preparing to land Marines.
Posted by MarcLord at 2:36 PM

Yes these talks may be promising; but they can also be staged to appease the American's public opinion, that's growingly weary of Bush's refusal to do diplomacy with Iran.

I suspect, instead of negotiation, they will do more sabre rattling behind closed doors, Iranians will not surrender to their unilateral demands, they will walk out and say: see, we tried diplomacy! Let's nuke them now!

The whole pretext of nuclear weapons and Isreal wiping is such a FALSE and unjustified pretext that makes me really sick!

The want to conquere Iran without fight! And if Iranians don't accept defeat, they will blame it on them! Who ever doesn't surrender unconditionally to Cheney becomes a danger!

You're right about Cheney and Israel, it's just not always easy to see who is using whom. If Israel hits Iran, Iran can absorb it anyway, and Israel's doom is sealed. All I know is that Cheney wants Iran attacked and brought to heel before it's too late, and he doesn't realize it IS too late.