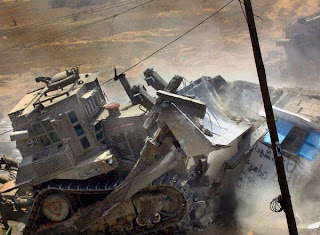 Bush + Caterpillar D-10 = Run!
For all of you haunted by nightmares of Dubya mowing down innocents, mocking his victims while laughing hysterically and shrieking, "Oh please, oh please don't kill me," your nightmares can stop now. Reporters are who he's really after, as Newsweek's Holley Bailey relates:

"Does President Bush have it in for the press corps? Touring a Caterpillar factory in Peoria, Ill., the Commander in Chief got behind the wheel of a giant tractor and played chicken with a few wayward reporters. Wearing a pair of stylish safety glasses--at least more stylish than most safety glasses--Bush got a mini-tour of the factory before delivering remarks on the economy. "I would suggest moving back," Bush said as he climbed into the cab of a massive D-10 tractor. "I'm about to crank this sucker up." As the engine roared to life, White House staffers tried to steer the press corps to safety, but when the tractor lurched forward, they too were forced to scramble for safety."Get out of the way!" a news photographer yelled. "I think he might run us over!" said another. White House aides tried to herd the reporters the right way without getting run over themselves. Even the Secret Service got involved, as one agent began yelling at reporters to get clear of the tractor. Watching the chaos below, Bush looked out the tractor's window and laughed, steering the massive machine into the spot where most of the press corps had been positioned. The episode lasted about a minute, and Bush was still laughing when he pulled to a stop. He gave reporters a thumbs-up. "If you've never driven a D-10, it's the coolest experience," Bush said afterward. Yeah, almost as much as seeing your life flash in front of your eyes."

Hmm. Is blogging a type of reporting?

(Graphic is of an Israeli D-10 Caterpillar flattening a family's house.)