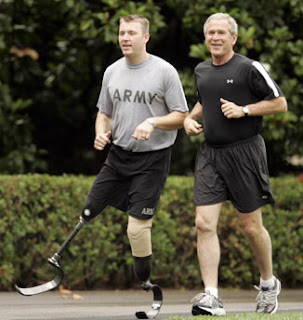 A Deficit Of Honor, A Deliberate Dereliction

The all-volunteer army is being ground to bits by the politicians who incessantly claim to support our troops. Rather than having to deal with the physically or mentally wounded and undertake the expense and burdens of caring for them, I suspect those politicians wish the wounded would've died valiantly in the field. The truth is, the Bush Administration looks on its volunteer foot soldiers as the scum of the earth, and the evidence proves it. Every time someone in that Administration or its sycophantic husk of a political party utters the phrase "support our troops," you should think "Bullshit!!"

The deplorable state of the Walter Reed Army Medical Center (WRAMC) has been subject to a number of exposees recently, with the Washington Post, NPR, and even the Army Times coming out with stories on black mold, rats, medical neglect, and withholding of aid to severely wounded and disabled armed forces personnel. What the WaPo and NPR stories failed to emphasize or point out is WRAMC takes its funding and its orders directly from the Pentagon. Unlike the Veteran's Administration hospitals, which treat veterans, WRAMC treats active-duty soldiers, most of them permanently disabled.

"Treat" definitely isn't the right word. The Pentagon is vigorously pursuing a policy of low-balling or denying disability classifications, particularly against soldiers with brain injuries. In one facility, Mologne Hotel, there is not a single counselor available for the 300 occupants, all of whom have either been blown up, have significant brain damage, or suffer from severe PTSD symptoms. The system is openly treating its servants, people who have been traumatized already by vicissitudes most sharp and hot, like shit. Can you imagine?

They're trying to give out the least amount of money possible, and are giving boys who are missing large chunks of their skulls and brains, and who will never be able to hold a job again, insultingly low disability ratings. One such example is the son of Lt. General Antwerp, as the Army Times article "Wounded and Waiting" points out. The younger Antwerp, blown up by an IED, has no colon. Nor a spleen. Nor parts of his skull and brain. He has short-term memory loss, and can't recall the names of his friends. His disability rating on discharge? 20%. An excerpt from the article:

The hard stats say soldiers were better treated before the Bush Administration came along. Remember, the quote above is from the Army Times; presumably, soldiers still read the Army Times. All the examples above are not functions of anectdotal incompetence. They arise from deliberate, systemic, mean-spirited stinginess. As a matter of policy, the government is saying it is not responsible for the mending of soldiers' minds, and that disability payments to them and their families are better spent elsewhere. In fact, Walter Reed was on Congress's list last year of bases to close. One wonders what will be done with the so-called "vegetable ward" there with people who have half or more of their brains missing.

Armies run on discipline, and the bedrock of discipline is honor. Careerism and corruption are well-known commodities in any Army, but this is too far out of control, and there's no question that morale is being systematically destroyed. The question is how much. Part of the answer is that the military has begun accepting convicts and felons as new recruits.

William Pfaff believes the Army is suffering from a deficit of honor, and has written a brief and damning article on the destruction of the volunteer army. Here's an excerpt:


[The Army's] officer corps has proven disinclined to assume responsibility for mistakes and crimes. There and in the lower ranks, the evidence in official dealing with scandalous incidents has been of lies, denial of responsibility, and scapegoated inferiors. No regular field grade officer appears to have been inconvenienced as a consequence of prison and torture scandals.
This is perhaps to be expected in an army serving an elected administration in which no high official has been held publicly responsible, or assumed responsibility, for any of the disastrous consequences of administration foreign policies of the past six years, and the president himself seems ready to defy the electoral judgement of the American public on his Iraq policies.
It is to the honor of the military that the main objections to abusive or illegal prisoner treatment, and appeals to higher courts for legal redress in such matters, have not come from administration civilians but from the professional legal officers of the services themselves. On the other hand there are accounts of assistance by military doctors at torture sessions and in prisoner abuse, undoubtedly demanded of them in the line of duty, but in contravention of their professional oaths.
Reports on the new army’s excellent material and personnel development do not outweigh evidence of a different failure in the military services, a deficit of honor. This seems the result, not only of individual failures, but of a corruption in the military system. As honor has always been held the quality redeeming the “servitude” of military life, and the violence of the military vocation, this is a serious matter.