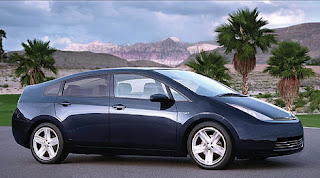 Don't Know Much About Hydrogen
The 2009 Toyota Prius is worth thinking about. It'll get 80 mpg city, 100 mpg highway. Given my current driving patterns, that would mean I could get by with about a tankful of gasoline every three months, or about 60 gallons of gas per year. This seems like a better solution than my less-than-reliable project, a 1987 Mercedes diesel wagon, which is still waiting its intended conversion to bio-diesel because upkeep is a three-steps forward, random-number back sort of task.

For various reasons, oil production is in all probability at a functional peak. People who watch oil supply as a pastime are free to argue about whether Peak Oil occurred in 2006, or may occur in 2012 or 2020. The argument is a little rabbinical for my taste, because due to depletion of the biggest old fields and political conflict, Cheap Oil is over. Optimists think new finds or technologies will ameliorate the mess. They are wrong, at least temporarily. It's very hard for a society to transition from one energy source to another. As for new finds, if huge oil fields are discovered under Antarctica, well, that's not cheap oil. It would be very expensive to extract. As for new technologies like ethanol, otherwise known as food formerly grown by oil-powered machines and fertilized by nitrogen converted from natural gas, well, it makes hydrogen power look efficient. Hydrogen has a 12% energy-return ratio.

Calorically, a 20-gallon tankful of gasoline in an SUV is about equal to 60,000 hours of manual labor. That's a windfall. I've burned more than my share of gasoline on this earth, often gleefully so. I have reveled in the propulsion, and don't want to go cold turkey. So 100 miles per gallon whilst I figure out how to change my life sounds pretty damned good to me. Noted Hordie and friend Ann S bought a Prius and loves it as a cherished possession. When it comes to propulsion Ann's partner Al C. is more inclined to assemble bicycles from recycled parts, a laudable endeavor, but I suspect the privilege of the Prius has begun to win even him over.