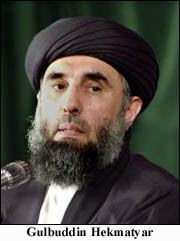 Afghanistan Makes Way For The Taliban
Afghanistan's parliament just voted to grant immunity to anyone involved in the past 25 years of conflict. It means they expect the Taliban to take Kabul in a spring offensive, want to work with a new incoming government, and wish to live. This is a white flag. It expresses a distinct lack of confidence in NATO's ability to hold the country, and signifies a legal separation from Afghanistan's President, Hamid Karzai, ceremonially painting him as a Judas Goat.

The Taliban has gotten money to arm and feed new fighters in preparation for a spring offensive, probably more than doubling its current men-at-arms to about 100,000 strong. Mullah Omar and Gulbuddin Hekmatyar, the Talibani who used to run the country and know its nooks and crannies, have not been neutralized, and are coming back in force.

Now they'll welcome democracy. They've got the votes.
Posted by MarcLord at 11:58 PM