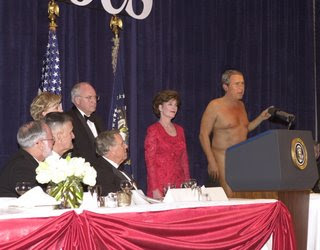 The past few weeks have been one long power play by Mr Bush: on everything from the Iraq war to the firing of federal prosecutors and the wiretapping of American telephones, the White House has been both aggressive and defiant. Last week, the combative president even tried to launch a stealth takeover of the US regulatory system, putting a White House commissar into regulatory bodies such as the Environmental Protection Agency – and increasing the risk that such expert agencies will set policy by the dictates of politics rather than science.

And closes with something I'd like to read in the Wall Street Journal soon:

The founding fathers knew the dangers of an imperial presidency, so they gave Congress the job of reining him in. Now is the time for the legislators to start doing that job in earnest.

The emperor is starkers.
Posted by MarcLord at 4:40 PM