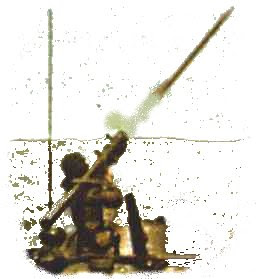 Sunnis Raise Ante--With SAMs
One of my pet hobbies on this blog has been to warn almost incessantly that the Saudis and the Iranians, if Iraqi Sunnis or Shi'ite groups were squeezed hard enough, would both start to supply surface-to-air missiles to their favored cousins, and that these missiles would drastically drive up US troop losses to an entirely new level. It appears to be happening, and the Sunnis aren't getting shoulder-fired SAMs from our the islamo-fascists in Iran. They're getting them from our islamo-friends in Saudi Arabia. Here's the story:

The United States military has confirmed that all 13 U.S. soldiers aboard a U.S. Blackhawk helicopter military helicopter were killed when it crashed near Baghdad, Iraq.

"A U.S. forces helicopter went down northeast of Baghdad ... Emergency Coalition Forces responded and secured the scene. Thirteen passengers and crew members were aboard the aircraft and all were killed," said a statement issued by the U.S. military.

The cause of the crash is not known and an investigation has been launched, but witnesses near the crash have stated that the helicopter was hit with a "rocket" or another form of a "projectile" and was in flames while flying in the air, before it crashed.

"I'm not sure if it was a rocket or other projectiles. After the helicopter was fired upon it was obvious that it was losing control. Then it crashed with an explosion and the smoke started," said a farmer who witnessed the crash. He also stated that he and other witnesses refused to go near the downed helicopter to attempt a rescue of survivors, but was concerned that if he had done so, soldiers would have begun to fire shots at him.

I was against the Iraq War because it wasn't hard to see this kind of thing coming. It is reason to mourn, not cause for celebration. No good comes of it. Well, not unless you're an arms manufacturer. Then go ahead and pop the cork on another bottle of top-shelf bubbly. You get another $100 million to build another helicopter. And unless someone stops Dubya's next doubled-down long-shot bet, whoever makes helicopters for the US Army is going to be as happy as Britney Spears hopped up on cocaine and vicodin.
Posted by MarcLord at 5:01 PM

Constantly, into smaller and smaller pieces, my heart breaks.

Thank you for writing what you do in such a readable, non-smarmy, passionate way Marc. It keeps me sane.

Well I'm glad it's doing some good, but keep the brave heart going. These generals are sooo in denial, a state which can't endure for long in a war.