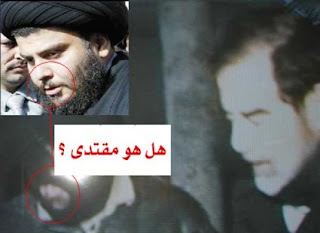 Sunni muslims are pretty damned sure Moqtada (or variously, Muktada, Muqtada, and Sadr III) Al-Sadr was the black-hooded hangman who pulled the lever on Saddam Hussein. The photographic evidence isn't more than circumstancial, but it doesn't need to be. It works as a perfect rumor and metaphor, since the execution took place on the Eid (Iraqi Day of Forgiveness), and because barring his untimely death, Moqtada Al-Sadr is destined to be Iraq's next real leader. Al-Maliki, the Bush Administration's Prime Marionette in Iraq, who has promised to disarm all militias equally and bring security to Baghdad, is one of his followers. Maliki's natural inclination is one of advocacy for Sadr III and the Dawa Party, and his life depends upon his effectiveness.

Moqtada's great grand-uncle led the prolonged Shiite rebellion against the British in 1920. His father-in-law founded the Dawa Party, a militant Shiite Islamic political group, in what is usually said to be 1958. His father was the most popular Shiite politician in Iraq, and was martyred along with two of his other sons in Najaf in 1999 when his car was machine-gunned. Dawa is a close parallel, rival, and sister party to SCIRI, the Supreme Council for the Islamic Revolution in Iraq (founded 1981). Like SCIRI, many Dawa members have spent time as political refugees in Iran, and many from both parties are paid by Iran. Dawa is home-grown, with a long history of working to bring about a religious revolution by any necessary means, mainly by the removal of the secular Baath party. Its assassination attempts include one on Tariq Aziz in 1980, one on Saddam in 1982, another nearly successful one on Saddam in 1987, and one on Uday in 1996. It paid for each unsuccessful attempt in imprisonment and executions. The Ayatollah Muhammad Bakr Al-Sadr (Sadr I) and his sister, Amina, were executed in 1980. Many others were executed then and at various other times.

While the Sadrists aren't exactly the same as the Iranians themselves, and their vision of government isn't quite the same, they are Iran's blood brothers. It should be particularly ironic that these are the people Bush and the Cheneyettes are handing Iraq to. As for Moqtada at the gallows? C'mon. This is the Mid-East. It was payback. 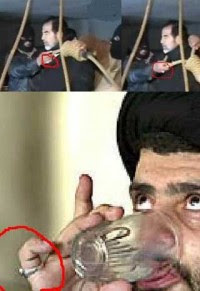 Marc,
Your posts are always compelling. I look forward to each one. Thank you.

Hope,
I'm so glad you think so. Particularly because your posts inspire the same feeling in me. You and the The River Blog are usually my first stops on the web after HuffPo, which is only my version of getting standard news. Whereas you're more for pleasure and the simply good feeling of knowing there's at least one common traveler out there.

I've been studying Iraq's ancient and recent history lately, one of those things that blogging forces you to do. I read the book "A Peace to End All Peace" back in the 80s, which is about how most mid-East countries were formed and most borders were drawn at the end of the Ottoman Empire. Obviously it's a very complicated story; the simple part is, it's almost a certainty that any new Iraq will be subject to Sharia law.