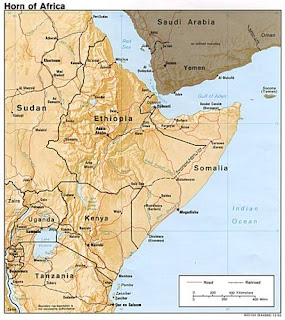 Somalia and Oil: Blackhawk Down-erer
I knew very little about Somalia beyond the Hollywood movie, other than knowing the US has had some troops there. So when Ethiopians with American backing invaded Somalia, I told myself, "MarcLord: there must be oil there. Use the Google and check it out." Sure enough:

According to documents obtained by The Times, nearly two-thirds of Somalia was allocated to the American oil giants Conoco, Amoco, Chevron and Phi]lips in the final years before Somalia's pro-U.S. President Siad Barre was overthrown and the nation plunged into chaos in January, 1991. Industry sources said the companies holding the rights to the most promising concessions are hoping that the Bush Administration's decision to send U.S. troops to safeguard aid shipments to Somalia will also help protect their multimillion-dollar investments there.

Officially, the Administration and the State Department insist that the U.S. military mission in Somalia is strictly humanitarian. Oil industry spokesmen dismissed as "absurd" and "nonsense" allegations by aid experts, veteran East Africa analysts and several prominent Somalis that President Bush, a former Texas oilman, was moved to act in Somalia, at least in part, by the U.S. corporate oil stake.

But corporate and scientific documents disclosed that the American companies are well positioned to pursue Somalia's most promising potential oil reserves the moment the nation is pacified. And the State Department and U.S. military officials acknowledge that one of those oil companies has done more than simply sit back and hope for peace.

Conoco Inc., the only major multinational corporation to maintain a functioning office in Mogadishu throughout the past two years of nationwide anarchy, has been directly involved in the U.S. government's role in the U.N.-sponsored humanitarian military effort.

So, it turns out Conoco's corporate offices had been acting as the de facto US embassy in Mogadishu, and still are. And the expulsion of a social revolution-cum-islamist regime would indicate that there is a goodly amount of oil there, the extraction of which naturally requires a bought-off regime and stepped-up security:

But since the U.S. intervention began, neither the Bush Administration nor any of the oil companies that had been active in Somalia up until the civil war broke out in early 1991 have commented publicly on Somalia's potential for oil and natural gas production. Even in private, veteran oil company exploration experts played down any possible connection between the Administration's move into Somalia and the corporate concessions at stake.

"In the oil world, Somalia is a fringe exploration area," said one Conoco executive who asked not to be named. "They've over-exaggerated it," he said of the geologists' optimism about the prospective oil reserves there. And as for Washington's motives in Somalia, he brushed aside criticisms that have been voiced quietly in Mogadishu, saying, "With America, there is a genuine humanitarian streak in us...that many other countries and cultures cannot understand."

But the same source added that Conoco's decision to maintain its headquarters in the Somali capital even after it pulled out the last of its major equipment in the spring of 1992 was certainly not a humanitarian one. And he confirmed that the company, which has explored Somalia in three major phases beginning in 1952, had achieved "very good oil shows"- industry terminology for an exploration phase that often precedes a major discovery-just before the war broke out.

"We had these very good shows," he said. "We were pleased. That's why Conoco stayed on....The people in Houston are convinced there's oil there."

I couldn't find anything definitive about the size of the finds, but the igneus nerds have been increasingly a-flutter, with this 2000 Association of American Petroleum Geologists report being fairly representative. Offshore finds are said to warrant the installation of drilling platforms. More and more, "Al-Qaeda" and "Taliban" seem to be fancy words for "people who are stingy tightasses with our oil."
Posted by MarcLord at 5:35 PM