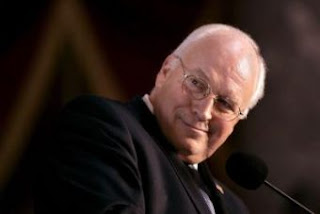 Iraq Study Group (ISG) Report Released Today
Remember, Dick, you'll be retiring for health reasons. "For health reasons," you got that? And when you give the farewell speech, try not to look like you just boiled Hansel and Gretel, ok?

I have a different take on the ISG than most other folks. To my lights the "Iraq" and "Study" parts of the ISG are extraneous, since those are pretty much screwed up beyond repair and too late, respectively. I figure the Group is really part of a much more important project to save the Bush Family Legacy and fulfill Dubya's Destiny. Now, if you were hired to pull off one miracle or the other, a short pause for quiet contemplation as you struggled to breathe, breathe, would reveal you'd need to get rid of Dick Cheney (the master of disaster himself, the man that made the Neocons famous) first to give yourself a fighting chance.

Jim Baker is as good as it gets. Where he goes, things get fixed, he makes people happy, and he passes out credit to everyone but himself. He flat gets things done. Freeing the hostages from Iran. Iran-Contra. Getting the rest of the world to pony up $70 billion for Gulf War One. Carlyle Group contracts. Oil deals. Getting Iran to help out in Afghanistan. A bunch of stuff I don't know about. Cheney gets by on doggedness and clenched teeth. Baker makes things look effortless, and like he had nothing much to do with them.

The Group wisely started off by attacking Cheney's biggest liability, Donald Rumsfeld. Why do I think this? Well, if a minor objective is to throw some sulfanomide and gauze on the sucking chest wound that is Iraq, you had to get rid of Rummy. The man had no more business running America's war machine than I do painting Rembrandt forgeries. Next you must control both ears of the President, and explain why diplomacy is an easier, quicker way to fulfill his Destiny as the Toughest, Smartest, Jesus-Son of All Time. This means prying Cheney away with a crowbar, isolating him in an echo chamber, and piping ether into it as an entymologist would into a bug's kill-jar. Getting Cheney gone is no mean feat, since a paranoiac like him maintains his own security apparatus (What, you think I'm kidding? The man travels with a complete medical crash team, an ambulance, and his personal physician. And then isn't ashamed to say so.) but James Baker has a lot of tools at his disposal, lots of good and powerful friends besides the Bushes who he has made richer and happier over the years (many of them in the Mid-East) and one helluva lot of guile. And now the job is easier because getting Rumsfeld fired was like cutting a Siamese twin in half. Condi did her best disco happy dance over that one (I like to think she's a closet Pointer Sisters devotee).

It was Dubya's parents who introduced him to Condi Rice at Kennebunkport in 1998, when she was Provost at Stanford, and a political science professor known for specializing in Soviet Russia. They wanted her to protect Junior's blind side (presumably his knowledge of foreign policy), and Condi charmed the pants off him. They have been very close ever since. Cheney may have access to the President's left ear and may have obligated him in the distant past with $20 mill here or there, but Condi has the President's right ear and his real affections. Condi is a family friend, thus a natural enemy to the Vice President, Rumsfeld, and the neo-cons. That's my bet for where Baker started building pontoon bridges.

Not everyone agrees with the above speculation. A lot of people much smarter and on the inside don't. Below is part of an exchange from FDL's great session between me and former ambassador Joe Wilson, who started the ball pushing back against Cheney by writing his editorial refuting some of Cheney's lies about Iraq's nuclear activities, "The Truth About What I Saw in Niger." Note, I'm not grandstanding, there were about a thousand people there either commenting or lurking--in fact I was close to star-struck because Joe Wilson is a patriot and a hero in my book, and I am totally star-struck by his wife, Valerie Plame. As a measure of what the Wilsons mean to this country, at the Washington Press Club Dinner this year where Steven Colbert spoke, he eviscerated everyone in the room except Joe and Valerie. Them, he honored. Anyhow:

Glad you’re still here (was on conf call from 11PST til now). Question:

Baker seems to be driving to neutralize Cheney via the ISG, and there are a number of authoritative leaks that have seemed to be his handiwork. I am a Baker admirer and in real life I occasionally negotiate with delusional companies. So yes, I’m projecting biases. But do you think JBIII had anything to do with getting rid of Rumsfeld? I’m asking for speculation, not definition.

Joe Wilson: I think the elections had more to do with Rummy’s departure than anything else. That may help with the acceptance of the ISG report but remember it is the White House that has the final say, not SecDef.

Me: Thanks. You’re probably right, but I would think Cheney has felt very threatened by Rummy’s departure, and imagine he tried to do anything he could have to prevent such. This would indicate some change on who helps the White House formulate its final say.

I see the ISG less as a serious policy document, more as a vehicle to get Junior to fulfill his destiny in a more economical way, by listening to more practical advisors. Ex posto Cheney. Freely admit, I’m projecting and have no hard data here. It just seems like a good negotiator’s approach to dislodge the necessary roadblocks.

The PNAC target remains Iran. Cheney’s targets remains Iran, the Caspian Basin, and direct energy control, whereas the ISG represents transition to a containment model. The two are inimical. If Cheney undercuts its key recommendations, which boil down to keeping Iran and Syria non-volatile and being a bit freer about bargaining with Iraqi oil, then the failure of the ISG itself would naturally provide basis for going ahead with less gentle methods. This is the fate of our Republic and its wealth that are being played with here by The Crazies.'

Guess what? I was being deferential. I don't think the elections had much to do with Rumsfeld's resignation. Bush himself said so. And Baker is a great deal-cutter. He'll salvage what he can for the Bushes, and to a great extent, that's a good thing for us. It likely means de-escalating vis-a-vis Iran, and giving all the countries in the region a stake in seeing Iraq stabilize.

From Today's HufPo...Problems with the ISG recommendations:

Recommendation 77: The Director of National Intelligence and the Secretary of Defense should devote significantly greater analytic resources to the task of understanding the threats and sources of violence in Iraq.

If this really needs to be said, we are screwed even worse than we thought.